On Friday 21st February, 27 of us headed up to North Lees Campsite for 24 hours of UBES fun. This was actually a contingency plan. We were originally going to Snowdonia but the avalanche risk and 100mph gusts meant that this was no longer (quite sensibly) on the agenda. Camping was nowhere near as cold as the last time UBES visited (Nov ’13 climbing trip), The lack of communication about eating utensils meant that a number of us enjoyed coco pops and rice snaps out of service station paper cups! 9 of us walked around the Kinder Scout Plateau (18.36km, 650m ascent, 6hrs) and the rest spent the day climbing at Burbage Edge just north of Hathersage. The visibility considering the forecast and awful weather expected was in the end very good with fantastic views of Manchester(!) and the dark, desolate bog that is Bleaklow. Memories of D of E 2010 were most certainly rejuvenated with Edale Rocks, Kinder Downfall basking spectacularly in the February sun. The waterfall at Kinder Downfall was actually being blowing back upstream, making picking a dry and sheltered lunch spot all the more difficult. This was the scene at the top of the plateau: peat bog! 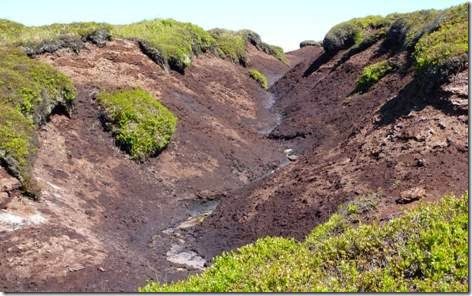 Afterwards we all enjoyed a well deserved hot meal in The Little John Inn, The liver, bacon and Brownies were quite a treat! After a late departure (8.15!) we all returned in Bristol at around midnight (Anna drove the minibus all the way!). Just shows that you can have a successful 24hr UBES trip.