60 years have passed since an epic transcontinental expedition, an idea dreamt-up in the university canteen by Bristol finalists longing for a post-exam adventure, caught the attention of the local press and senior figures in the University and subsequently led to the formation of the Expeditions Society.

The world has seen monumental change since the team (Mark Howell, Peter Krinks, Malcolm McKernan, Tony Morrison, Donald Pilton and Roger Tutt) first set off on the 31st August 1960; we’ve seen people walk on the moon, the fall of the Berlin Wall, the formation of the World Wide Web, and now a global pandemic. But what seems to have been consistent throughout all these years is that the spirit of adventure, which brought together the first team, is shared by and has continued to be present in the society. Bristol students are still dreaming of seeing more and doing more in the world beyond their textbooks, and UBES has been a place where we can find great friends who share this spirit.

Figure 1 – At the Council House on College Green, the Lord Mayor of Bristol wishes the team good luck as they set off. Photo from http://www.nonesuchexpeditions.com/

Given the importance of UBES to so many peoples’ lives, we could hardly let a 60th anniversary pass us by without a celebration. Therefore, planning began not long after the start of the academic year.

I’d received a brief education in party-planning though simply living up next-door to the social butterfly of the street in Leeds that I grew up on – an elderly woman who would throw a garden party at every opportunity, her biggest event being the Queen’s Diamond Jubilee in 2012, cementing the idea in my 13 year-old-mind that 60 years is an especially significant anniversary. Nevertheless, considering I had never organised a large-scale event myself before, and the fact that I still had other presidential duties to keep up with (as well as the third year of my degree…), the prospect of putting together an Alumni dinner felt slightly daunting.

Fortunately, UBES is far from being a one-woman-band and I was grateful to have a committee who were just as enthusiastic as I was to make the event happen, as well as former committee members who’d already done a lot of work to set up an Alumni network, helping me at every step of the way.

We chose the beautiful former church, the Elmgrove Centre in Redland, as the venue and began publicising the event. We were hoping to reach as many UBES Alumni as possible to invite them along, and this was made possible in a large part through word of mouth, and people sharing the event with friends they’d met through UBES. Meg Clark (Secretary 2017-18) had organised a talk by Tony Morrison, one of the founders of UBES, a couple of years earlier which had provided us quite a few people we could contact, including families of the original team.

However, there were still quite a lot of names that we’d found through old archives and documents that we wanted to reach out to and invite, and so began my investigation using the wonders of the internet to track down members, many who were students in the 1990s.

Sadly, not everyone we reached out to could make it due to having moved far away from Bristol, or having family commitments, but I was touched to receive so many messages from Alumni saying how happy they were to see UBES going strong, and how the society had been such a positive impact on them. There was even a group, who were students in the early 2000s, that couldn’t make it as they’d already planned a weekend away together in the Yorkshire dales with their families and small children. Even though this was a slightly tragic clash of events, it was so amazing to hear that Alumni are still meeting up regularly on their own trips, even as big life changes like starting a family begin to happen.

After months of planning, the day arrived and I woke mostly with excitement as well as an inevitable feeling of nervousness, however there was a lot to do so I put those nerves to bed as I headed over to Janine’s house, as we were using her kitchen to begin the mass catering in order to feed all the guests that evening. And across Bristol in another kitchen, Clara and Rob were baking the most spectacular cake for dessert.

Once all the cooking preparation was done, we headed over to the venue to get set up and put up decorations and old photos around to create the nostalgic atmosphere.

A big piece of advice I would give any future event planners is to always remember to factor in time to get yourself ready in addition to everything else. This was a lesson I learned the hard way, as while everything at the venue was almost ready to go with only a few minutes before the guests would begin arriving, I realised I was still in the scruffy clothes I’d been cooking and running around in all day. But with the help of Amy whizzing me back to my house in St. Pauls to throw on a dress and run a brush through my hair, I was able to get back just in time, but it certainly would’ve been nice to have a few extra minutes to spare! 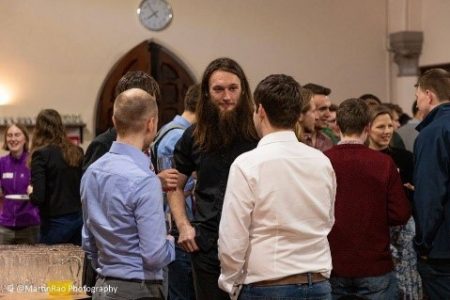 The event began and it was simply beautiful to see everyone in the same place, chatting and laughing with old friends and alumni from different eras. It was everything we’d hoped for and more, especially at a time when the country often likes to pit generations against each other. In some ways, it felt more like an extended family gathering over anything else. 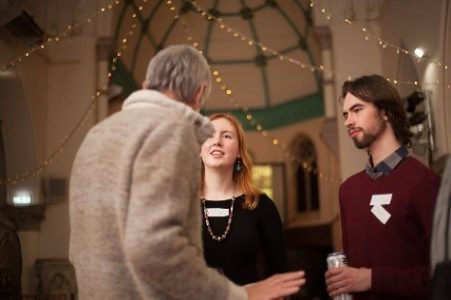 Once the buffet had been served, we had a few different speakers on stage. We were lucky enough to be joined by Gwen Tutt, the wife of Roger Tutt (a member of the original team), who told us more about the early years of UBES. 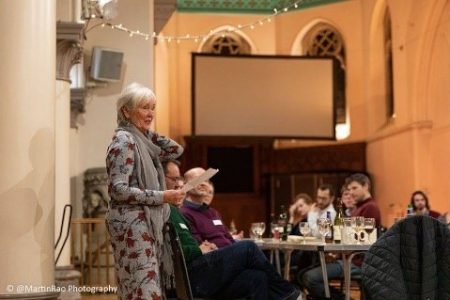 We then heard from David Askew (President, 1990-91) who did a lot to revive and grow the society, which at the time was quite small. The introduction of weekend trips to Wales and elsewhere saw the society grow massively in popularity.

Next we heard from Matt Telfer (President, 1995-96) who shared with us how climbing became part of the society in the 90s. It was really interesting to hear how something like climbing ,which is one of the most popular activities of the society today, with weekly trips to climbing walls and plenty of outdoor climbing, came about and was integrated into UBES. 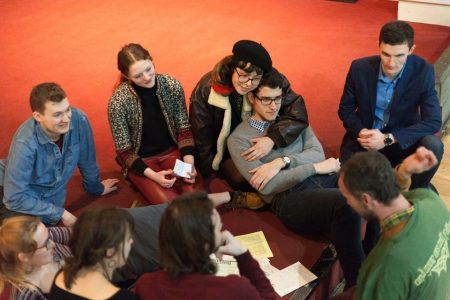 Judith Pope (Member in early 2000s) then gave a beautiful talk about how UBES gave herself and many others a wonderful friendship group that continues to this day, and how it has adapted with having children but still going strong. Something which I think resonated with a lot with the audience. 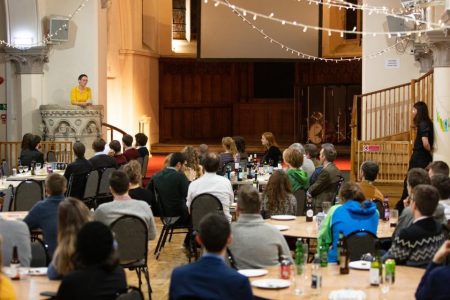 Finally we heard from recent graduate Cat Easdon (Expedition officer 2016-17 and development officer 2017-18) about the UBES expedition to Georgia, helping to develop the Transcaucasian Trail. We also heard from current member Florence Wallace about “Project Armenia” which is a collaboration between her, UBES members Val Ismaili and Peter Rosso, in collaboration with other international climbers to develop new rock routes in Armenia. These recent projects highlighted that now just as much as 60 years ago, UBES has brought together amazing people who have gone on to do some pretty amazing things, and will certainly continue to do so into the future.

A huge thank you to everyone who came to the 60th Anniversary and helped with the event. I hope that we can have more things like this in the years to come!