As much as it saddens me to say this, the future of our fortnightly weekend trips is uncertain. If you’re a 2020 fresher worried about how you’ll possibly live out your post- gold DofE outdoors dreams next year… I’d like this article to showcase the fervent enthusiasm of our members for all things outdoors, and reassure you that the UBES-organised weekends are only a fraction of what we get up to.

So, having realised I haven’t produced any piece of writing longer than 150 character text messages in far too long, I won’t try to force a lengthy foreword. I’m hoping that this blog post does what it says on the tin; offering a mini-library of ideas, inspiration or perhaps just an enjoyable read of a few trips/adventures/mishaps.

From mountain marathons, to trekking in deep Swedish Winter, to micro-adventures close to Bristol, I hope, whether you’re an old member having a lurk, or a prospective 2020 fresher, you have a little read and enjoy.

A Cycling Micro Adventure – Wye Not? 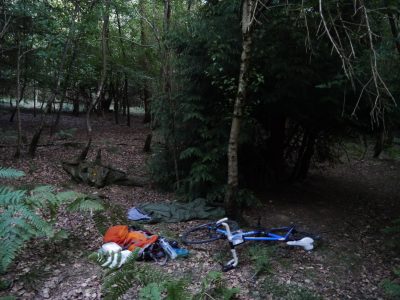 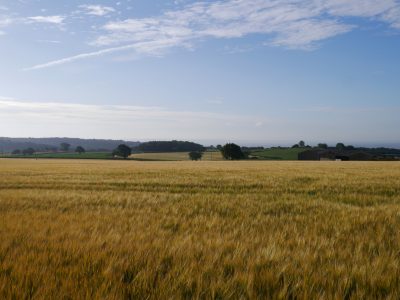 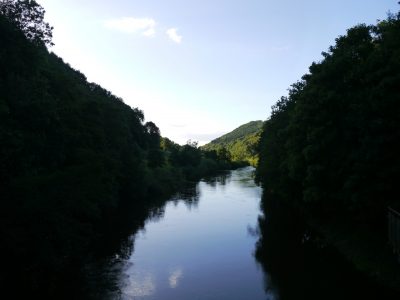 After going out on a few rides around Bristol, increasing the distance to my pre uni life long-distance cycling abilities, I decided I wanted a bit more. I had never been properly bivvying (sleeping outside without a tent, just a sleeping bag and a somewhat waterproof and breathable bag), and had never gone to the Wye Valley; so I decided to do both in one go.

Leaving in the afternoon, passing through the Severn Bridge, Chepstow and Tintern Abbey, after a measly 65k, I arrived at Symonds Yat Rock. I settled in a spot in the woods away from the paths where I felt I wouldn’t be seen and lied in my bags, the temperature already dropping since the sun has set. Observing the sky through the nautical twilight, away from light pollution, you are a lot more aware of the sky’s colour as the branches above you sway in the wind. That’s when I started hearing a couple of wild boars sniffing about, almost being able to see then in the darkness; but I assume that is not a necessity for a bivy.

Waking up with the sun, I then cycled home on near-empty roads with some great lighting. Whatever the length, Bristol is great for a cycling adventure, having such quick access to the countryside and being nearby to truly beautiful areas such as the Mendips, the Cotswolds, or even the Wye Valley.

Post-lockdown escapes: Weekend adventures in the summer of coronavirus 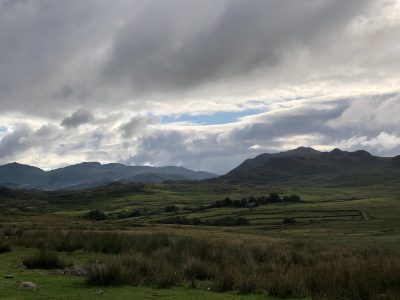 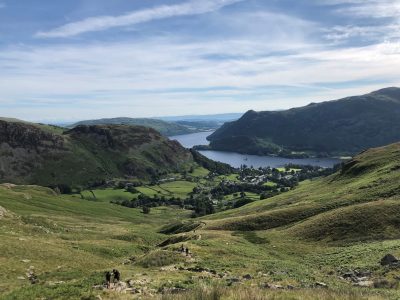 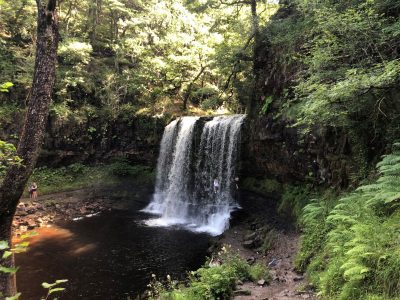 Over the summer this year, I had grand plans as an expeditions officer for UBES, but with coronavirus preventing international travel and throwing into question travel within the UK, I opted for a more ad-hoc approach. Instead, I got a job working from home, meaning I wanted to make the most of the weekends as my only time off to explore where possible. Here are a couple of the trips away I’ve done in the last few weeks.

As the lockdown was easing in July, I headed up to the Lake District with Val for a weekend of wild camping, walking and scrambling. It was a great break from being stuck inside, far from any hills for months on end. Even on a busy summer weekend, there’s still plenty of quieter areas in the Lake District, so we were able to camp entirely undisturbed (except by sheep), and then head to the higher fells during the day. We climbed Striding Edge up to Helvellyn, a grade I scramble leading to a stunning view of almost the whole national park.

But from Bristol you don’t have to travel that far: yesterday I went to the Brecon Beacons (just over an hour’s drive from Bristol) to explore some waterfalls and gorges, including some wild swimming to cool down. UBES taught me to embrace this aspect of the outdoors with my first lake bag on my first weekend trip, and was definitely the highlight of this route. 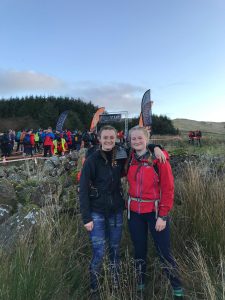 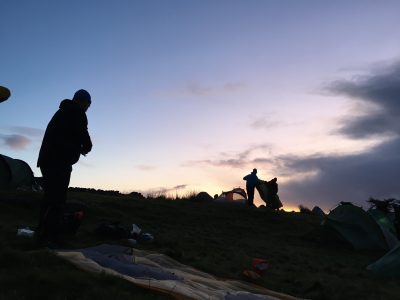 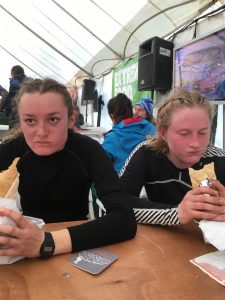 “The challenge is in your decision making; what route you choose, what kit you take, how hard you push…….which partner you choose”

Musing about competing in the OMM one day in the far future + 1 keen best friend = 6 months later standing at the start line of our very first OMM in the mountains of Argyll and Bute.

The OMM (Original Mountain Marathon) is an iconic British Mountain Orienteering race held on the wettest, coldest, grimmest weekend in October possible (facts) in the mountain ranges of England and Scotland every year. Competitors must use understanding of terrain and conditions to make appropriate route choices and carry everything their team needs for an unsupported overnight camp.

My housemate and I had the smart idea of entering this year. I’d competed in similar youth events when I was younger, but this was the first type of event for Eloise who, whilst is a keen Lakeland fell runner, doesn’t have loads of experience of map reading or orienteering. We ran over two half-marathons on each day, got lost, suffered more than sufficiently, fell over more times than we could count, and overall finished 3rd Women’s Team in our category! Whilst it was definitely brutal, painful and a good ‘navigation ego- check’, it was an awesome weekend and I’m sure it won’t be our last.

This time last year, in the midst of my newly discovered, post A-Level freedom, three friends and I decided to backpack the South Downs Way. This route takes you along 100 miles of well-trodden and well signposted paths, over rolling hills and through idyllic countryside villages. We took our time, doing about 20km a day, stopping at a pub for a birthday dinner, taking welcome deliveries of cheesecake and generally having a swell time. On our way we strolled past all kinds of people: go hard or go home, do it in a day mountain bikers, or retired couples that have been walking little sections of the path every month, even people going the whole way in crocs. 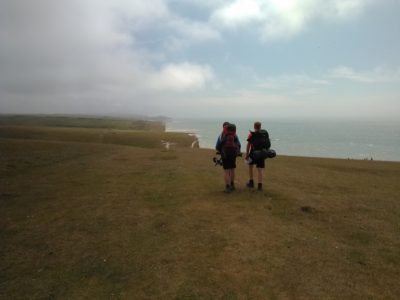 I can’t say it was easy, but I can’t say I would wish away the problems. Blisters, bites and bruises are all quickly forgotten and almost always worth the effort. Normally a broken, dribbly and cold shower would be miserable, but after a hot and sweaty day, a refreshingly cool, sunset shower overlooking the valley can be a highlight of a trip.

I found that although adventures of the “harder, better, faster, stronger” type have their place and are amazing, an adventure that is ‘leisurely’ and inside one’s comfort zone allows time for the mind to wander freely and a heart that finds wonder in the details of the world we live in.

Swapping the Mountains for the Sea 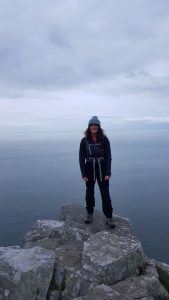 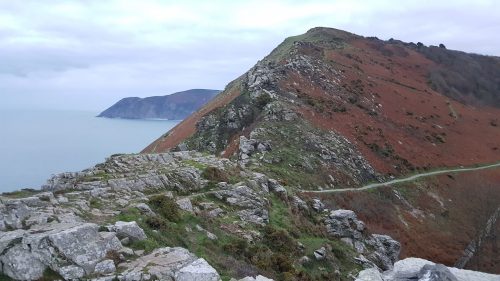 The day began quite a disaster! Alice was late picking me up, the Brecon Beacons was flooded, we had no maps for other locations on us and we had no idea what we were going to do and where! Luckily UBES has an abundance of maps so we headed to the UBES store and eventually decided upon Exmoor, a location neither Alice nor myself had been before. We jumped in the car and started driving. There I was in the passenger seat with an OS map open trying to find a route for a day’s hike (getting quite car sick). Alice was driving with absolutely no destination in sight (her worst nightmare!). Just when we thought the day was starting to work out, we find ourselves stuck in traffic jam wondering if we will even make it to Exmoor!!

We eventually arrive late afternoon, tuck into our classic UBES sandwiches (cheese and pickle of course) and set out for our mini adventure. Despite the complete last-minute nature of the destination and walk, it turned out to be one of the loveliest day adventures I have had. The scenery was beautiful – dramatic coastlines, beautiful woodlands with rivers and waterfalls, secret coves for UBES skinny dipping and fresh, salty sea air!! We were both blown away by Exmoor, a place we would never had thought of going, and have planned many more trips back to the area.

It was very refreshing exploring somewhere new and opened my eyes to more of the fantastic national parks we have waiting for us to explore. The great thing about mini adventures is you never know what to expect, and sometimes the unexpected turns out to be the best days out! 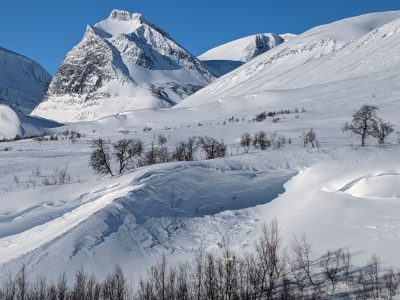 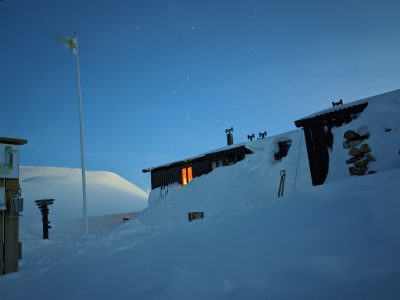 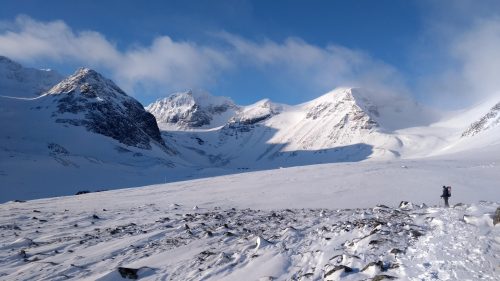 I originally proposed this trip as a joke – Cat and I were discussing possible hiking routes and the Kungsleden (A 440km route in the mountains of northern Sweden) came up. Coming from the warm damp south of Cornwall I’ve always had a love of snow so suggested “What about doing it in winter”, expecting it to be immediately shot down as far too extreme and unrealistic. As it turns out, while the conditions are harsh there is a lot of very good mountain accommodation courtesy of the STF; We noticed that there were a couple of commercial tour operators doing it around March and figured “what the hell, if they can do it so can we”.

After stocking up on cool winter gear like snowshoes and ridiculously puffy jackets, we took a brief detour via the UBES 60th anniversary party (The only ones there wearing winter boots) and then flew via Stockholm to the tiny airfield in Kiruna. I remember before the trip being honestly worried that there wouldn’t be enough snow. In hindsight this is hilarious, as I reflected while standing next to a multiple meter snowdrift while waiting for the bus from the airport.

I have never experienced a more beautiful landscape than the snow-covered mountains. Snowdonia is wild and rugged, the Alps are breathtaking but there’s just something about snow that makes everything so much prettier. And oh boy it was pretty to start with. We spent 8 days alternating between the freezing -15C temperatures of the windblown mountains, and the cozy wood-burning fires and pleasant company of the STF huts. My favourite part of the trip by far was a journey to the Tarfala valley. In summer it has a glacier research station, but in spring we had the whole valley, with its 3 stunning glaciers, to ourselves. 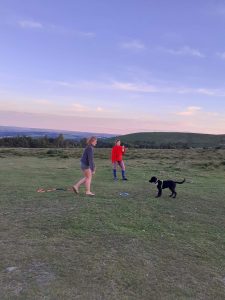 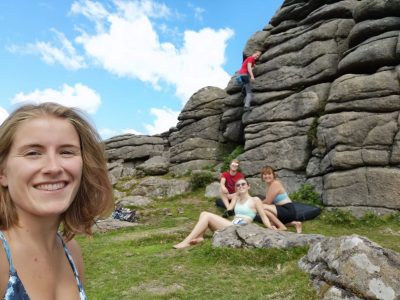 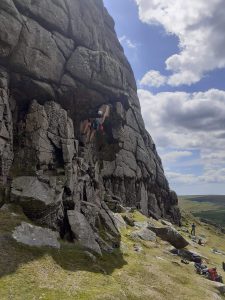 4 ubesters, a dog and an ex ubmcer went to Dartmoor…

The weather forecast looked amazing and we couldn’t resist the calls of the granite to shred our soft lockdown hands. On the Saturday we mainly bouldered at houndtor. Then in the evening we cooled off in haytor quarry and set up camp – but not before a few beers and a 2 hour game of frisbee. The Sunday was booked off for trad climbing and consuming copious amounts hummus. I joined UBES 2 years ago and would never have thought I’d be doing the mini adventures I’ve done this summer. It’s all down to the skills I’ve learnt and finding the friends with a sense for adventure that keep us answering calls to flee the city air and explore the outdoors!