16th May 2022 Charlie Harding
Off
Adventures, Walking
Share This

After many months of trying to plan an epic together, George Leigh and I headed to Snowdonia over the Easter weekend. Our goal was to complete the Welsh 3000s, the fifteen mountains in Wales above 3000′ (915 m). The challenge officially runs from summit to summit, but then there is of course the task of getting up the first one and down the last one too. As we didn’t want to carry camping gear with us on the day, we opted to do the whole route, including the approach and final descent, in one day. In total, this adds up to 50 km and 3600 m ascent, definitely my longest mountain day to date.

Due to upcoming exams, we had failed to convince anyone else to join us. (Turns out quite a few members of UBES are students, who’d’ve thought it?) The two of us drove up on the Wednesday afternoon, heading for a campsite to get some much-needed sleep before hitting the hills. As the first mountains were coming into view (a perk of driving during the day), the conversation turned to UBES trip accommodation, specifically the decent bunkhouses that Snowdonia has to offer. We wondered why we were camping, and phoned up our agent Ewan White to see if he could book us anything more indoor. Within twenty minutes it was confirmed, and so we rerouted to the Junior Mountaineering Club of Scotland’s hut in Bethesda. We made a pit stop to buy real food, as we would no longer have to live off a jetboil, and then settled into the converted terraced house filled with as many bunks as it could physically fit (the stated capacity is 16). We had the place to ourselves, and yet were paying almost as little as we would for a tent space for two! 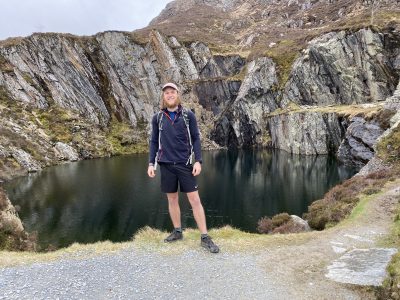 The quarry pool on the ascent to Moel Siabod

On the Thursday we had a warm-up, testing our expected pace and making sure our legs were up for the challenge. We chose Moel Siabod, which George sold to me as his favourite mountain in the area! I don’t know how I’ve never done it before, despite this being my seventh trip to Snowdonia with UBES. It was a lovely day out, with a lakebag in the quarry pool, which was deep enough to jump into from its cliffs, and then some scrambling up to the summit and along the ridgeline. On our way down, we stopped off at Caffi Siabod, a firm favourite among UBESters. If you do Mountain Leader training through UBES, you’ll be sure to have plenty of opportunity to get to know it: I went for my favourite, their giant rock cake. 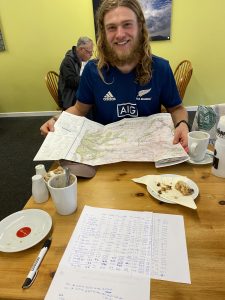 While we were at the cafe, we pored over the maps of our route, and tried to calculate approximate timings for the following day. It was very hard to estimate how quickly we’d be moving, particularly towards the end of the day as we would be tired, but in the end settled on two different sets of timings: an ambitious 10 min/km + 20 sec/contour, as well as a more realistic 11 min/km + 30 sec/contour. These would mean we’d be out on the hill for around 10½ – 12½ hours, of which 8½ – 10 hours would be between the summits.

Having mentally exhausted ourselves with the routecarding (note to self: prepare a spreadsheet next time!), we headed back to the bunkhouse to pack and prepare dinner. An ample helping of pasta with stilton fuelled us up for the next day, and we headed to bed very early to get some rest. We got up shortly after 5 am, and after breakfast drove to our starting point, about an hour away down country lanes in the northern Carneddau. 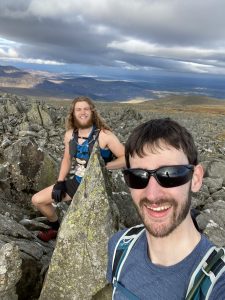 One of the few sunny summits, Carnedd Gwenllian

The route started gently enough, and we ticked off the first few peaks of the Carneddau quickly. We started off in the sun, and had views out to the Menai Strait and Anglesea on our first ascent towards Foel Fras. However, the good weather was not to last, and by the third summit we were inside the cloud, as we would be for much of the day. We reached the final summit of the Carneddau, Pen yr Ole Wen, ahead of even our ambitious schedule, then took the steep descent to Ogwen Cottage, our first valley. After having the mountains to ourselves until this point, it was here that we first became aware of the Easter crowds, as it was Good Friday, with every parking space and layby filled.

We took a brief pit stop to refill water, then headed up Tryfan by its western face. In a time-saving attempt, we cut directly across a bog to get there, getting wet feet, which in hindsight could definitely have been avoided with the path we could see from higher up. The grassy climb was an unpleasant slog, but then it grew steeper and rockier for the final 200 m back into the clouds. The top was quite busy, so we pressed straight onwards towards the Glyderau. It was on this next ascent, a surprisingly nasty scree slope to bypass the Bristly Ridge scramble, that I really started to struggle, particularly so soon after the slog up to Tryfan. I was developing a stomachache, which I discovered a couple of days later was the start of a covid infection. This meant no chance of managing a run for the final third of the route, as George had been hoping for, but we pressed on at a slower pace. With such thick cloud around, there wasn’t a great deal to see on the Glyderau, so this section was quite uneventful, but then the visibility improved for Y Garn and Elidir Fawr.

Our next valley was Nant Peris, marking two thirds of the ascent, and closer to three quarters of the distance. We were more than an hour behind the slower schedule, so were expecting a rather late finish, but pressed on. We had originally planned to take a steep line up to our next stop, Crib Goch, but as we grew closer we couldn’t see any sign of it higher up, and didn’t feel like risking doing the whole ascent off-path. Instead we followed the road almost to Pen-y-Pass, and then took the Pyg Track up. It was now about 6pm, and the stream of walkers heading in the other direction must have been wondering why we were heading up the mountain at this time!

On the summit of Crib Goch

When we reached Crib Goch, the wind had got up, meaning we would be rather exposed on the steep scramble up to its summit. To avoid the wind, we contoured around, effectively taking us back to the path we had been originally planning to take. The contouring was a little sketchy, but once we were around, the path was significantly better than the traditional ascent, and the air was completely still. Once on the top we were greeted with an absolutely incredible view, as we poked our heads out above the clouds to be greeted by a cloud inversion sunset as if on a plane! We couldn’t stay around too long admiring it, as we wanted to get off the ridge before the sun set fully, so pressed on to Garnedd Ugain and our final peak of Yr Wyddfa (Snowdon). It was 21:00 by the time we reached the summit, as the last of the twilight was disappearing. We’d completed the challenge in 12h54, certainly not what we’d been aiming for, but an achievement to be proud of nonetheless. We just had to get down now, and very quickly the clouds completely cleared to give us a moonlit descent on the Pyg Track all the way back to Pen y Pass. 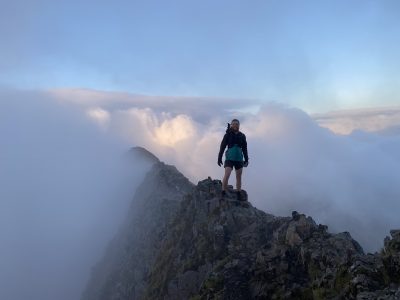 On the Crib Goch ridge

At the end (22:50, 15h50 after setting out), our support crew of George’s friend Kip and his dog Agatha were very kindly waiting for us, and gave us a lift back to the starting point in his campervan. I was rather too worn out to be a good co-pilot, so we missed our turning, and then poor Kip was not very impressed about the width of the lanes in his 7 m converted delivery vehicle. Meanwhile George was sitting on the bed in the back, cuddling Agatha. We did finally make it back to the car at about midnight, and then drove on home to get some well-deserved rest: I’m extremely glad we did not spend this night camping!

After a relative lie-in, we headed back to Caffi Siabod to meet up with Kip again for breakfast. We then had a very lazy day, stopping off at Llyn Padarn for a quick swim on our way back to the bunk house. In the evening, UBESters Raef Coles and David Exton came to visit us, and we made pizzas (George is an expert baker!) as we exchanged stories about our epic and their scrambling course. 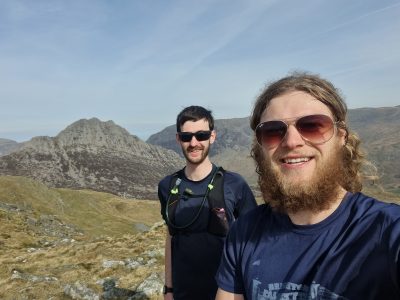 In front of Tryfan, with cloud-free summits in every direction!

On Sunday, we wanted to make it back home at a reasonable time, so opted for a quick fell run rather than a full day’s hike. Starting out from Capel Curig, we climbed the ridge up to Y Foel Goch, then descended to Llyn y Caseg Fraith, flew down the ridge to the Caseg Fraith bunkhouse (the typical accommodation for UBES trips to Snowdonia), and finally along the valley back to the start. We overtook a group of several dozen DofE’ers, feeling slightly bad that they had to plod along with such massive bags as we could race along just with running vests.

Having thoroughly drained any remaining energy we had left after the 3000s, we headed back home. We couldn’t stay away from Snowdonia for too long though: it was just two weeks until the UBES AGM trip back there!

The Welsh 3000s is one monster challenge, but I’d certainly recommend giving it a go at some point. We have taken the number of UBESters who have done the route now to 21 (last done in June 2016). It’s rather too long to fit within a UBES weekend trip, but the society is a great way of finding like-minded people for trying epics, or indeed for whatever adventures you’re thinking of. Just see who’s interested at the weekly pub, or ask directly on the UBES Forum! I’d like to say a huge thank you to George for joining me on this, and keeping me going as I was struggling at points on the mountain.

In terms of learning points, when I was route planning, I didn’t consider the effect of terrain or descent on timing, nor the effect of tiredness. Next time I’ll try to consider those too, and also try not to catch covid directly before an epic (I blame my graduation ceremony a couple of days before). It would also be a good idea to look into bunkhouses before setting out from home, as they can be just as affordable as camping and save on finding camping equipment.

Finally, a shameless plug to come to visit me: I’m now living in Munich, just an hour from the Alps, and I’d love for more UBESters to come over to stay!
UBES love, Charlie Harding