Come for the incredible mountains and beautiful walking and climbing, but stay for the great company, chilled evenings and fantastic Caledonian memories.

January 4th, 2018. I wake up, only just recovered from mentally scarring motorway experiences, and attempt to groggily stumble to the breakfast bunkhouse. The crushing realisation hits me that it’s now an (almost) unattainable 500 mile walk back to Scotland from my house in Bristol, and not even The Proclaimers can save me from a lonely porridge experience.

Like around half the cohort on this trip, this was my first UBES Scotland trip. We’d heard whisperings about terms like “in condition” and “crampons”, and a mysterious man called Rich who would promise to take us on a ‘journey’ to become serious winter mountaineers, but little did we know of the epic week ahead of us. After a harrowing two weeks over Christmas where my UBES family was replaced with my less interesting actual family, it was a fantastic to see people from corners of the country as far flung as “the South” and “the East” (generic names for generic places) slowly convene to service stations and Wetherspoons across the North. After failing to bundle Phil into the back of the van at Keele services to save him from his so called ‘exam revision’, our bountiful president Tom Kilcommons decided to destroy the tyre of the van in a fit of rage, forcing them to take turns to blow air in the wheel all the way to Fort William. It was that moment that I knew: this would be an awesome week.

The feeling of shared excitement began to build as the roads narrowed at every turn and dark shadows towered over our heads. Rhodri attempted to distract me by pointing out mountains, like the majestically named ‘The Nipple’, as well as either continuously coughing or saying the word ‘Ballachulish’ – it wasn’t too clear. Later in the trip I would quickly realise that I would never learn the Gaelic names of any of the mountains in the area due to an obscenely high vowel-to-consonant ratio. 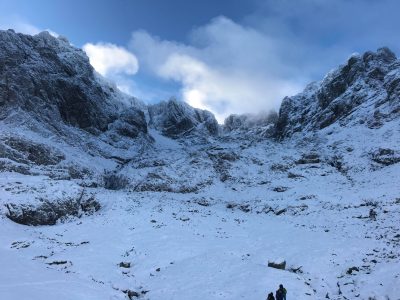 Our mate, the Ben.

After we arrived at the dinner bunkhouse and Rhodri revealed how much they had actually aimed to spend per-person-per-meal, the first of many shared dinner experiences began. This was closely followed by our first interaction with our Winter Skills Guide Rich, who revealed he’d be taking us to meet his friend ‘The Ben’ at a leisurely 8am the next day, and helped everyone kit out in hefty boots and weaponry. Meanwhile, the more experienced members planned some serious-sounding winter climbs leaving at (frankly insane) early hours of the morning, before retreating to bed to get a solid 5 hours sleep.

So began Scotland 2017/18. Each day, carefully overseen by the puppeteers Rory and Rhodri, would begin by convening in the breakfast bunkhouse with calls of either “hype hype hype” or “I hate mornings and you”, accompanied with appropriate levels of faff. This was followed by piling into some kind of vehicle and anywhere between 2 and 12 hours of cold, wintery, amazingness, before returning, drained, to the bunkhouse. We then found some unknown reserve of energy to help produce dinner (under the watchful eye of often-head chef George, or pastry chef Meg), or dollop variously light/heavy helpings of pickle onto sandwiches. This would be followed by choosing a suitably awesome route for the following day, and consuming alcohol and singing choruses of “Loch Lomond” as people slowly retire to bed. 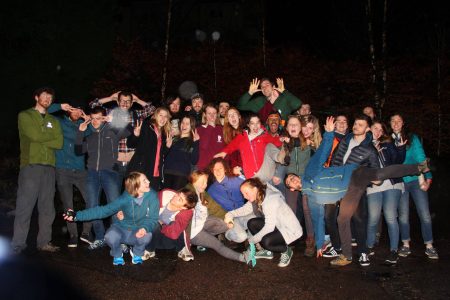 Working on our So Solid Crew cover band

I think on long trips like this it can be easy to slowly begin to hate everyone around you. However, in Scotland I found it went the other way – things became more familial and comfortable, as fortunately we have an amazing society that is just full of fantastic, friendly and caring people. I think people new and old all felt included and I couldn’t ask for a better group to spend a week with.

Our Winter Skills course began with Rich escorting us on a journey (in the boot of his pickup truck) into one of the Coires in Glen Nevis on with the north face of Ben Nevis looking over us. It was a fantastic day of crampon work and axe arrest, where copious amounts of falling, occasional stabbing and plenty of childlike sliding fun was experienced by all, in astounding scenery. Back in the bunkhouse, Rich updated us on avalanche risk mainly through questionable metaphors about whether you’d rather have a beer or a lottery ticket – but highlighting all the dangers carefully all the same. 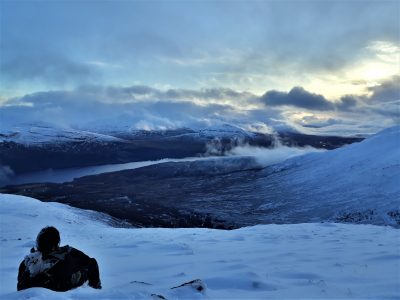 A rare shot of James Wheeler and Goaty in their natural habitat, Craig Meagaidh

The second Winter Skills day was on the (impossible to pronounce) Beinn a’Chaorainn, as we used all our newfound skills to ascend a wintery gully onto a very windy summit. On our descent the clouds cleared to give astounding views over Craig Meagaidh and the nearby Lochs – an apt reward for our hard work, and a fantastic, real winter day.

These first two days would prove the best of our winter conditions on the trip, allowing the more experienced members of the trip to complete some very impressive harder graded winter routes with similarly spectacular scenery – leading to some members describing their route as “the best experience of 2017”. Indeed, the following two horrible days of weather led to us opting to end 2017 a day earlier (something I believe is becoming a tradition) in the hope of good conditions in the new year. Groups took various shorter walks over this period- I opted for the West Highland Way from Kinlochleven, a beautiful valley walk even in poor wind conditions, which marked the first time a lake bag was not completely enjoyable for Hazza (a true feat). 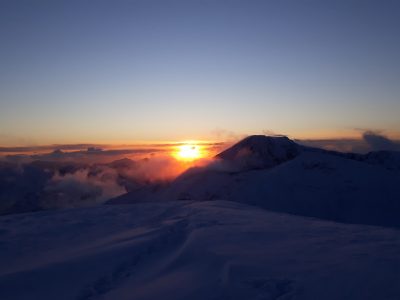 Sunset behind Ben Nevis from the summit of Aonach Mor (1,120m) after Golden Oldie (II)

The New Years Eve (Eve) celebrations were of course fantastic, with amazing food followed by sublimely skilled dance-offs, interpretive dance, a surplus of countdowns, and finally a selection of incredibly violent sock wrestling matches as more UBESters tried to demonstrate their superior strength – all with a good helping of Dutch courage of course. Fun was had by all, and the following day was spent filling in a route card to go from the bunkhouse to the pub (risk assessment: Hard), and getting some serious inspiration from badass mountaineering films. An intrepid few gathered that midnight for a warming view out over Fort Williams’ fireworks displays, before retiring to bed for a 5am start. 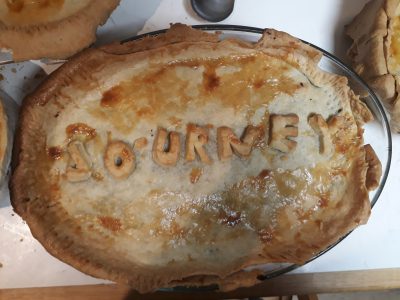 The most delicious thing created in Scotland 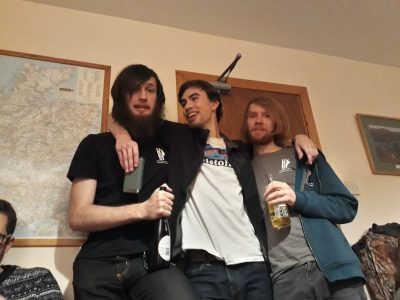 The last two days were dogged by considerable avalanche hazard putting most real winter routes out of safe reach. However, the weather itself was good, and didn’t stop some long and interesting ridge and valley walks going ahead. I was lucky enough to hike the Ballachulish horseshoe – a stunning ridge with a breathtaking view over all of Glencoe and a real wintry feel on the summits, occasionally punctuated by the shrieks of Zoe and Faye at each slip of the foot. 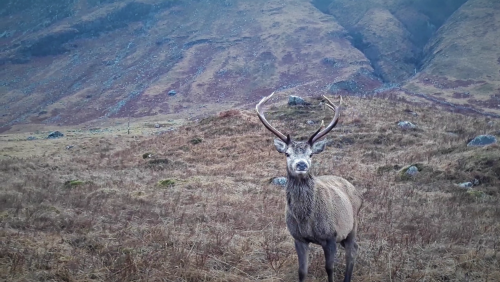 The final day was a selection of long valley walks or, in my case, a short run in the beautiful Glen Etive in Glencoe – where Hazza showcased her strength by wearing a t-shirt in literally freezing weather. A herd of stag next to the car reduced most vehicle members to being capable of making only incoherent noises. Other groups did spectacular sections of the Great Glen Way or West Highland Way, before convening at the wonderful Clachaig pub for a traditional haggis and whisky, for a real Scottish send off.

I would again echo the thanks of everyone else to Rory and Rhodri for organising the trip and, like most people, I feel Scotland 2019 can’t come soon enough – I can only hope for as excellent a group as we had this time.

As usual with UBES, come for the amazing mountains and beautiful walks, but stay for the great company, chilled evenings and fantastic memories. 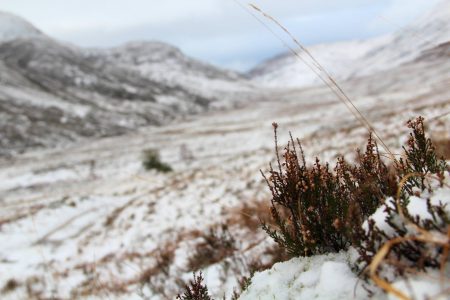