Iceland, a place like nowhere else I’d ever been before. Arriving to a rather grey and barren landscape with a distinct lack of trees was rather strange but we were soon at the Reykjavík eco campsite, about a 20-minute walk from the city centre. This campsite had everything we wanted and more including a wall of free food (leftovers from previous visitors) which of course we UBESters utilised rather a lot. We were also treated to a hot water urn, hobs and hot, if a little eggy-smelling, showers. We got used to the egg smell during the trip as it came from the sulphur in the geysers. 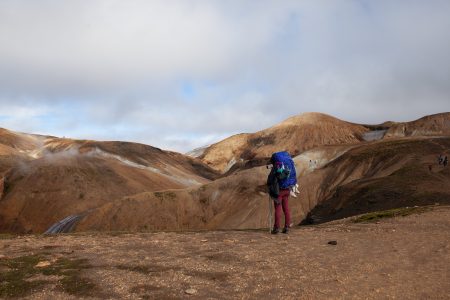 The trip didn’t get off to the best of starts with Alice’s “bag-luck” striking on 2 out of 2 UBES summer trips and the weather on our route taking a turn for the worst with high winds and plenty of rain. With this in mind we delayed the start of the trip and made the most of the swimming pool, Laugardalslaug, near our campsite. We made the most of the slides, used mostly by children half my size (I learnt why with one of the smaller slides as I came down it and hit the bottom immediately), the jacuzzies, ice bath and the pools which were all outdoors and heated. It felt very odd to be in a swimming pool outside whilst it was raining!

An early wakeup call the next day got us all on the coach to Þórsmörk via the beautiful waterfall Seljalandsfoss (foss meaning waterfall), which we were able to walk behind. After I got back, I found this song synonymous with the waterfall by Oddur Klemenzson. 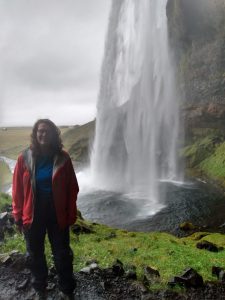 Jodie in her geographer element

We had a rather bumpy ride after that as we had to cross three very fast flowing rivers in a 4×4 coach, which involved the driver consulting with two other coach drivers following us every time to ensure we made it across. 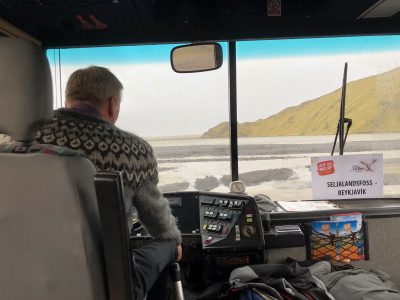 We arrived at our first hut and got settled into a white gazebo, which would become a regular occurrence at the huts. To explore the local area, we headed up the hill to be greeted with beautiful views on both sides of the valley. 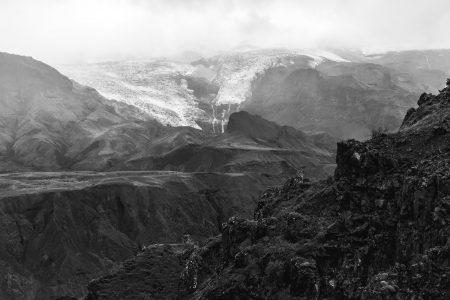 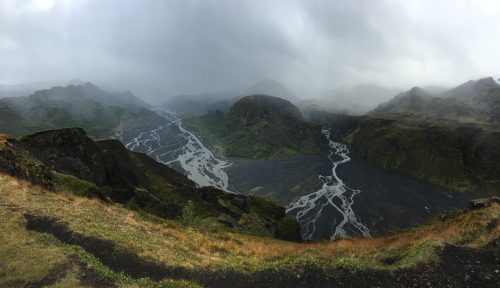 The next day we were finally able to start on our trek along the Laugavegur trail and we quickly encountered our first hurdle: a river plain we had to cross. This involved stripping down or rolling up trousers and using walking sticks as javelins to share them throughout the group. Crossing the rivers was rather difficult with heavy backpacks trying to knock you off balance, especially when you had to run downstream to rescue a rogue walking stick as I did! 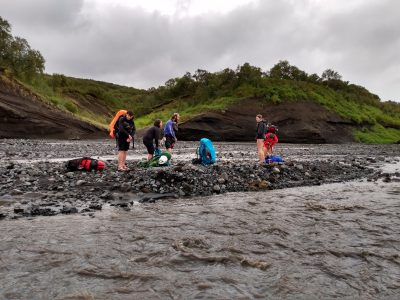 Day 2 involved a walk across a black desert, a very Star Wars-esque landscape and took us to the beautiful lake of Álftavatn, which Charlie and Tom found to be rather shallow when attempting to lake bag it. 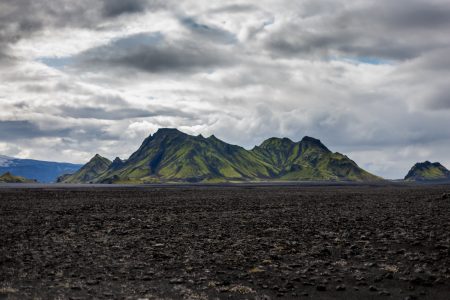 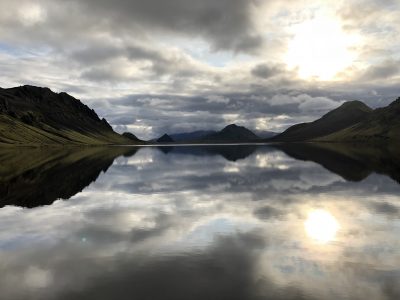 The walk to Hrafntinnusker brought us to the beautiful rainbow mountains and had us walking over ice sheets. It was a very exposed, high-altitude campsite with dry stone walled tent spaces, and dinner was rather eventful that night under James’ tarp with my dinner ending up on the floor and a ripped down jacket in the mix. Walking to the nearby peak gave us an amazing 360° view. The next morning, we headed off into a blizzard, and by the afternoon peaks in every direction were snow-covered.

Our destination was reached in Landmannalaugar where the promised hot pools were swimmer’s itch ridden, but despite this some people did go for a dip to no disastrous consequences that I know of…

We headed off on a day walk the next day, a treat for our legs and backs, where we walked over snow. 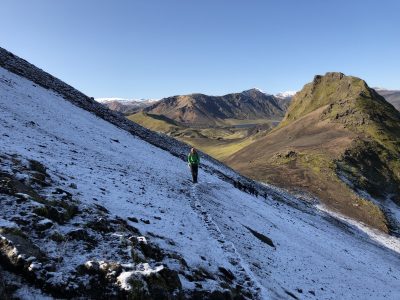 Back in Reykjavík, we got some glimpses of the northern lights by the harbourside and we had a @j9kitchen-led dinner of rather spicier than expected shakshuka that some of us, including me, had to pass onto James.

The trip was fantastically organised by Alice, who will hopefully have an end to bag-gate with our parting gift of a new rucksack; it was permeated constantly by Janine’s constant giggling; and we were very fortunate to have Xavier as our personal photographer. 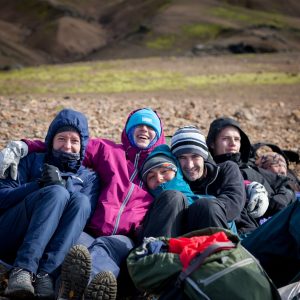 P.S. I read a great book after my visit called “Names for the Sea: Strangers in Iceland” by Sarah Moss, an autobiographical book written by an English professor who ups sticks and moves to Iceland for a year with her family.