2nd September 2015 UBES
Off
Uncategorised
Share This
After months removed from the luxury of the proximity of outdoor climbing in Bristol at the Avon Gorge, it all got too much. Despite the tens of indoor rock walls to be found across the capital there are no crags – unsurprisingly! The nearest outdoor rock to London are the Southern Sandstone crags just south of the North Downs, stretching from East Grinstead to Royal Tonbridge Wells, and they make for some great – if ‘interesting’ – climbing. In pursuit of the simple pleasure of cycling to the crag and climbing, this is what happened…
Inspired by a video on the internet entitled “Cicloarrampicando” which quite literally means “cycle climbing”, the challenge was set to link up the Southern Sandstone crags by bike and cycle between each one marked in the Jingo Wobbly guidebook. In addition to this Italian inspiration, there is also Kyle Dempster’s “The Road from Karakol (https://vimeo.com/69045994) which makes for a great 20 minutes watching which I can’t help but recommend. 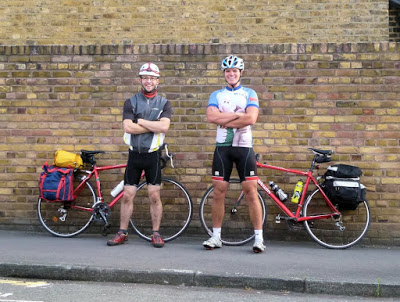 A frustrated Facebook message from my old school friend Quentin about being laid off work for a few days meant that an adventure was exactly what he needed to take his mind off! Originally we planned to bivvy overnight and complete the cycle in two days (this would later turn out to a much more sensible plan), but when Q was signed up for work again we decided to try and push it in one day. Our route would take us south out of Greenwich, past Biggin Hill and towards East Grinstead for the first crag at Stone Farm Rocks, south east towards Crowborough to take in the out-of-the-way Under Rocks before heading up by the main concentration of Southern Sandstone crags – Bowles, Harrisons, Eridge, High Rocks etc. With a route planned and kit packed, we were ready to go!

Following some last minute sorting, we set off at 6:13am stopping only for red lights. Our first challenge came in the form of Biggin Hill. Compared to alpine road climbs it was nothing, but we were still feeling it when we got to the top – and then came our first problem. My rear pannier was beginning to tear off the frame however we were able to cable tie it back on and head off. With some lovely cruising downhill from the top of the North Downs, leaving London behind us, we were really beginning to get into the pace of things until only 45 minutes after leaving Biggin Hill we hit our next snag. Quentin’s back spoke had snapped and, worse, become caught in his cassette. Fortunately this happened right in front of a petrol station so we were able to stop and sort the problem out quickly – a few laps of the forecourt later to check everything was in working order, we were good to go. 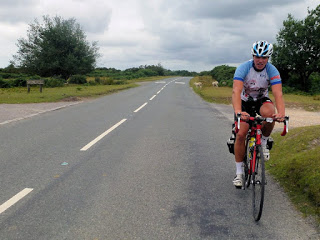 Our pace was steady until and after hitting East Grinstead with only a minor navigation hitch landing us in a dentist’s carpark. Before we knew it and after two and a half hours or so of riding and 33 miles we’d reached our first crag, Stone Farm Rocks. Following a speedy shoe change we were climbing. Because we could only choose route at each crag it made sense to pick a three star route, and we aimed to be climbing around British Tech grade 5a for the day. Our first climb was “Key Wall”, an interesting line up the side of an isolated block. With the excitement of being on the wall getting to us it was easy to forget that we still had a good distance of cycling to go. Cycling shoes back on we headed off over Weir Wood reservoir in search of Crowborough which was a steady 30km cycle from here. While this was the longest section between two crags on the route, we were rewarded with beautiful views of the Ashdown which was a contrast to the busy and lorry-infested A26. After stopping at the Red Lion pub (conveniently marked in the Guidebook) for water we carried on cycling; our pace had definitely slowed by this point and the undulating country lanes of the High Weald were beginning to take their toll on our legs. One particular highlight has to be the aptly-named “Steep Road” which Quentin dashed up having successfully clipped into his pedals on his first try (I’m sure any roadies will be more understanding about this than I was…) By 12:00pm we had reached Under Rocks – definitely one of the quieter Southern Sandstone venues I’ve been to! 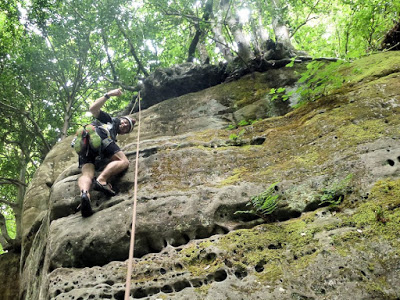 A word of advice for anyone considering Under Rocks as a Southern Sandstone venue: the climbing is fantastic but there is little parking, the path to the crag is well hidden and it’s very overgrown. Sadly the crag shows signs of vandalism and being more of a local drinking haunt than a popular place to climb. The holly leaf carpeted path proved… painful for Q in his flip flops but he persevered and we later found ourselves at the foot of the crag. We had decided to climb straight out of the crag and pick up our bikes at the top due to the overgrown nature of the place. The climbing at Under Rocks is predominantly quite difficult – any of the routes that aren’t covered in moss are 5b+ so we had little choice but to tackle “Evening Arete 5b”. Despite my downer on the crag because of the Strongbow cans littered along the bottom of the rock and the ‘drawins’ on the wall, this may well have been my favourite climb of the day.

By the time we had finished climbing, it was lunchtime. After a twenty minute cycle to the Kings Arms pub in Rotherfield we were grateful to find they had a two courses for £10 offer – I had sausage and mash while Q tucked into ham, egg and chips. These were washed down with ice cream and a hazelnut brownie respectively. Feeling energized and ready to push on we headed towards Bowles Rocks; despite being just up the road from Harrisons and Eridge this would be my first trip to the crag.
Bowles Rocks is located on the site of an outdoor education centre and is one of the best equipped Southern Sandstone crags with really easily accessible top rope anchors and some fantastic climbing. Cycling up the main road past the rocks we had settled on climbing “Fragile Arete”, another 3 star 5a route that was as close to the road as possible. The ease of setting up the anchor here meant we both shot up the route, and was also the first time we had seen other people climbing all day. Now with grey clouds rolling over the horizon we raced down the road towards Harrisons Rocks. 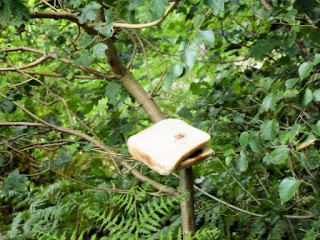 After a tree and peanut butter sandwich related incident (don’t dispose of your food by throwing it at a tree…), we headed up to the rocks and right towards the Isolated Buttress. To avoid a long walk along the crag to save time, and now feeling the day’s activities in our legs, we dropped down a grade to climb the three star 4c “Isolated Buttress Climb”. This was a big mistake. Previously, access to the anchors was made by jumping across onto the buttress but a loose block at the top made this dangerous and instead a climb around the side was required. Fortunately for us, another party climbing on the buttress had left a line in place to use as a handrail while traversing around the buttress and up onto the top. We got talking to this group and, a lengthy conversation about the Tour de France later, began to climb. Although the chat had set us back in our timings, Q and I agreed that this friendly, community spirit is the best bit of going on an ‘adventure’ (even if it only lasts a day!) and the climbing community in general and the hour or so we had spent at Harrisons was one of our favourite for this reason. 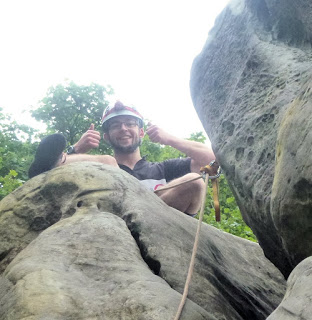 Of the nine crags listed in the Jingo Wobbly guide, we had visited four by this point and pressed on for Eridge however the rain began to hang in the air as soon as we reached our bikes. While Eridge is really close to Harrison’s rocks, it seemed to take an eternity to get there and even more time to start climbing. This may have been down to my reluctance to look properly at the guidebook, and I now realise the route we did wasn’t the one I had picked – instead of climbing the “sandy but good” three star “Hanging Crack”, we had actually ended up on 5c “Nuthin’ Fancy”. Feeling defeated after what, at the time, seemed like a particularly tricky 5a the rain didn’t help our mood and we sought refuge in the Paris Cave just around the corner. This was another mistake! No sooner than a minute after cries of “what is that smell?!” we noticed that we had worked our way into Eridge’s own animal toilet.

Sometimes it’s okay to take a hint, with the time now approaching 6:00pm we knew that even if we ticked off the rest of the climbs we would be cycling home into the night. Feeling satisfied with the 100km+ that we had now clocked on the bikes and the 5 climbs on top of that we decided to head back to Eridge station, grab a pint and take the train home – feeling defeated but pleased with ourselves. We bumped back into the group we had been climbing next to at the station and ended up on the same train home as them. If we were going to do a “Southern Sandstone” challenge again, I would recommend starting at the Southern Sandstone crags themselves! The 33 miles we had done before we even reached our first climb was unnecessary, but this thought left us with a plan for the future – it must be possible to tick them all off in a day! Maybe another time… 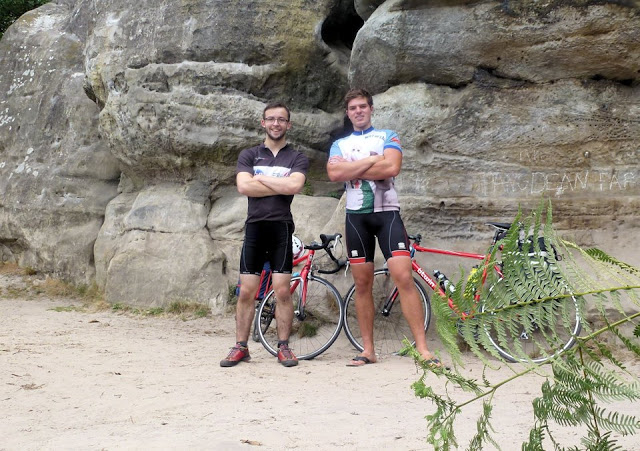