As clouds set in over Bristol on Thursday, four intrepid
young UBESters completed an Avon Gorge rite of passage as old as the rock its
self. For those of you reading this who don’t know the cliffs around Bristol
very well, one of the most visited sections of the edges running alongside the
river Avon on its way towards the mouth of the Severn Estuary is, suitably,
named ‘Main Area’. The wall here is divided into climbs on the lower section
‘Morning Slab’ and climbs on the upper ‘Evening Wall’, so named because a day
climbing can take in a route on each of these on the way to the top, with a
stop off at ‘Lunchtime Ledge’ halfway through. 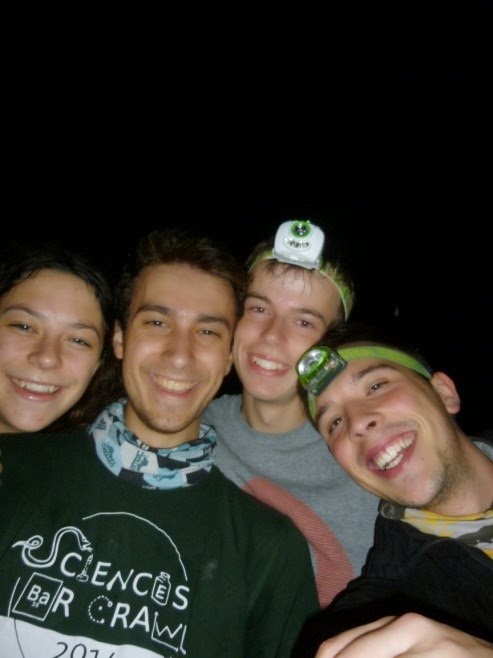 Well, at least that’s the order the guidebook recommends you
do it. Lunchtime Ledge is a huge section, large enough for climbers to untie
from their ropes completely and walk around without fear of falling, and so
since its discovery it’s been very common to invert the usual procedure and
spend the evening climbing Morning Slab, kipping overnight on the ledge and
then climbing out in the morning. We weren’t the first to do it, and we
certainly won’t be the last, but we may temporarily hold the record for being
the most naked. The weather on Thursday was glorious. Jenks and I had been
anticipating this since the start of the week, and Duncan and Emily perked up
at the idea in the Highbury on Wednesday night, so at 8pm we met at the top of
Whiteladies Road to grab a few beers and were shortly on our way. The clouds
hugged the city like a cosy blanket, keeping in most of the heat of the still
day, and never once threatened us with rain. Wrapped up and ready to go, we
arrived at the bottom of the gorge at about 9 o’clock.
We divided ourselves into teams. Thom and Duncs took the
slightly trickier HS Sinister whilst Em and I sauntered up The Arete (VD). In
contrast to spending a day in Avon, the night time was still and quiet. Thom
and I, sat on our respective belay positions, were able to chat easily at a
distance that would usually render everything inaudible, and I turned my
headtorch off and sat and belayed quietly until I managed to surprise Emily with
this shot: 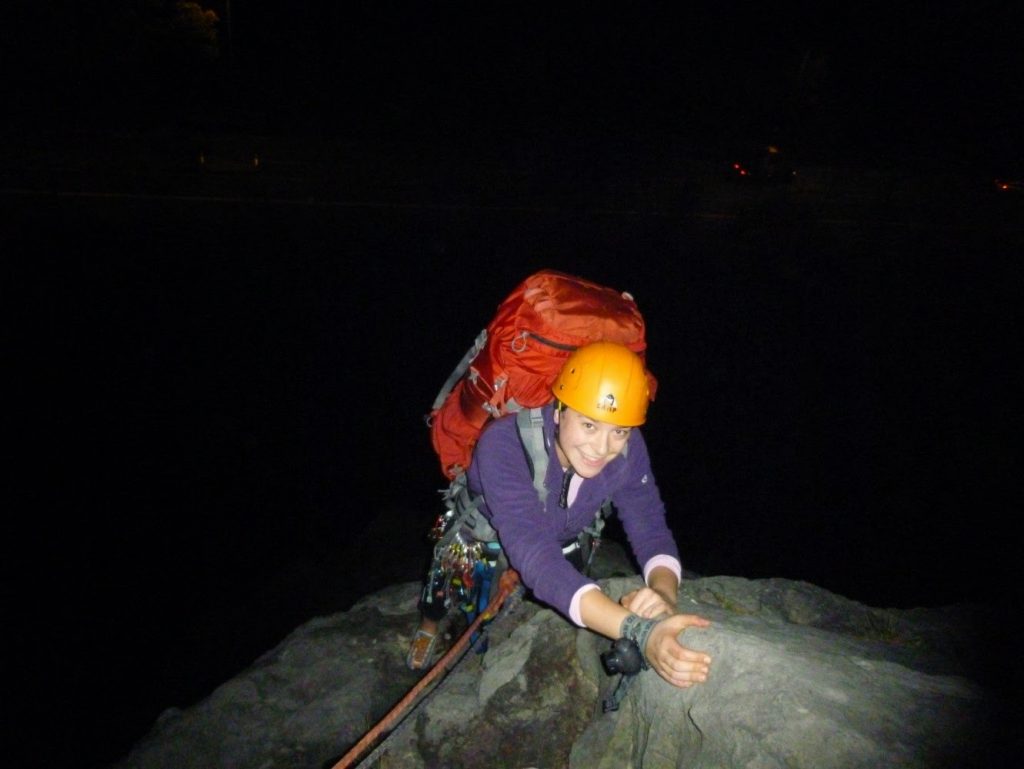 We clambered to the top, and after a little faff with ropes
and a short wait, were joined by Thom and Duncan. Soon after we heard a call
from a light source at the top of Evening Wall and saw the President himself
abseiling down to join us. It was so lovely to have everyone together that we
quickly made use of the gorge’s proximity to the city and promptly started
ignoring each other in favour of our respective mobile devices (I should point
out that this was a joke and the below was posed). 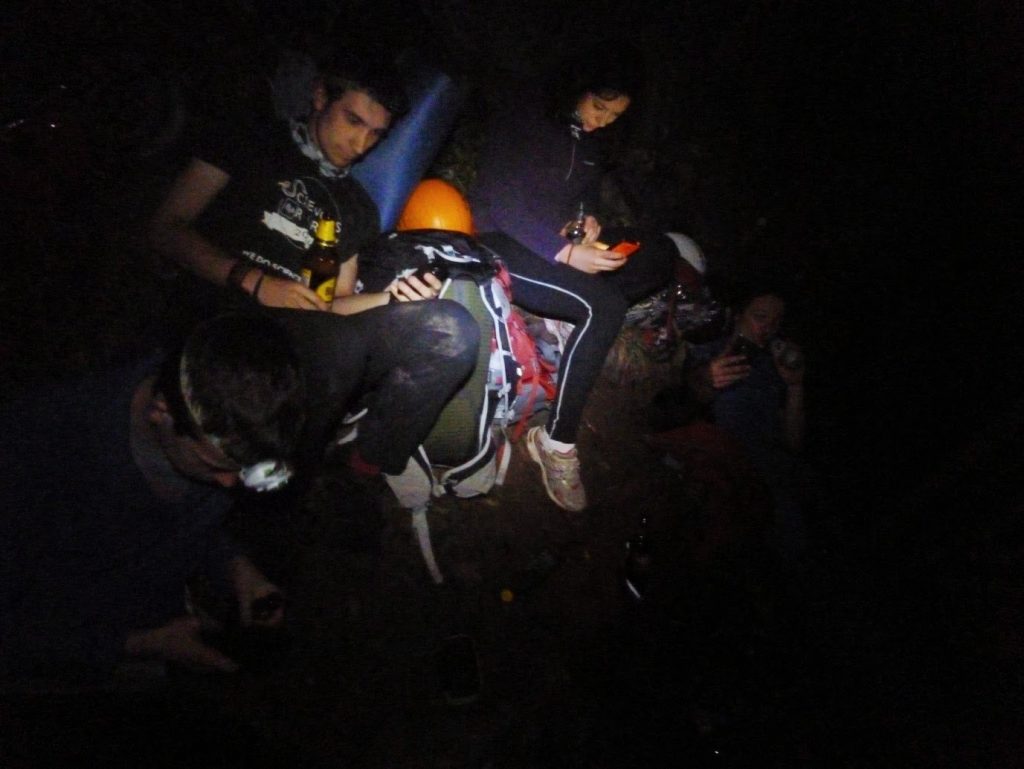 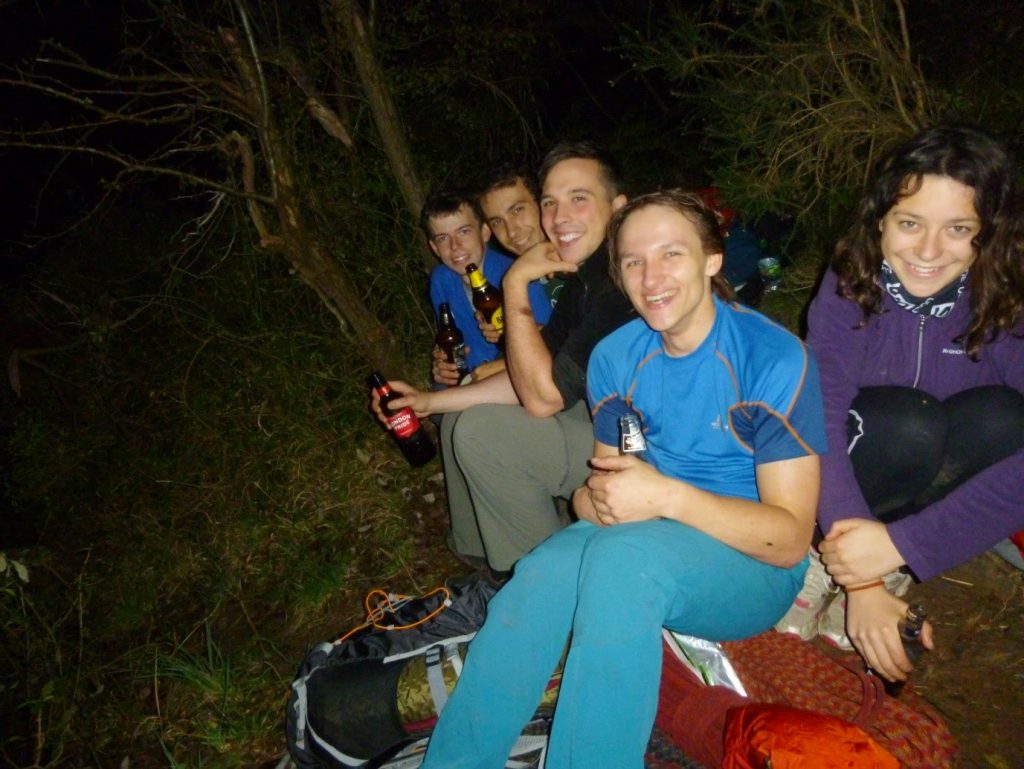 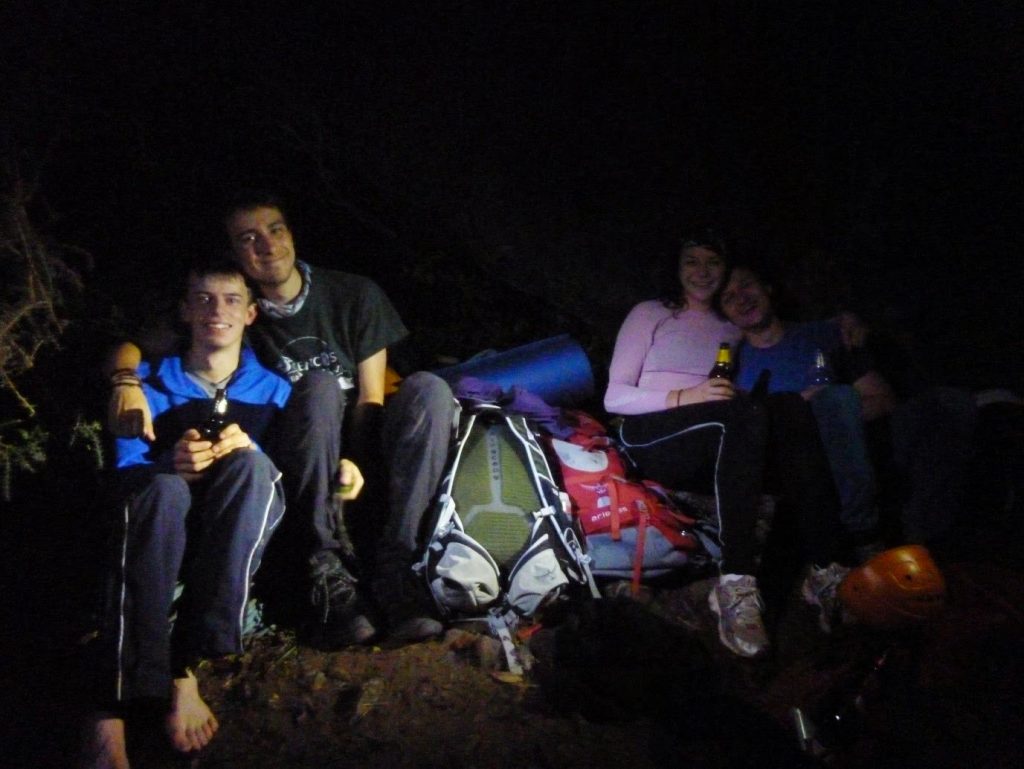 Once the beer had dried up we found ourselves sleeping
spaces, and, with levels of preparedness ranging from Duncan’s full bivi bag to
Laurence’s pile of ropes and bags, settled down to sleep. A makeshift net
stopped us all from sliding forwards and off the terrace, and we all woke up
well rested and ready to go: 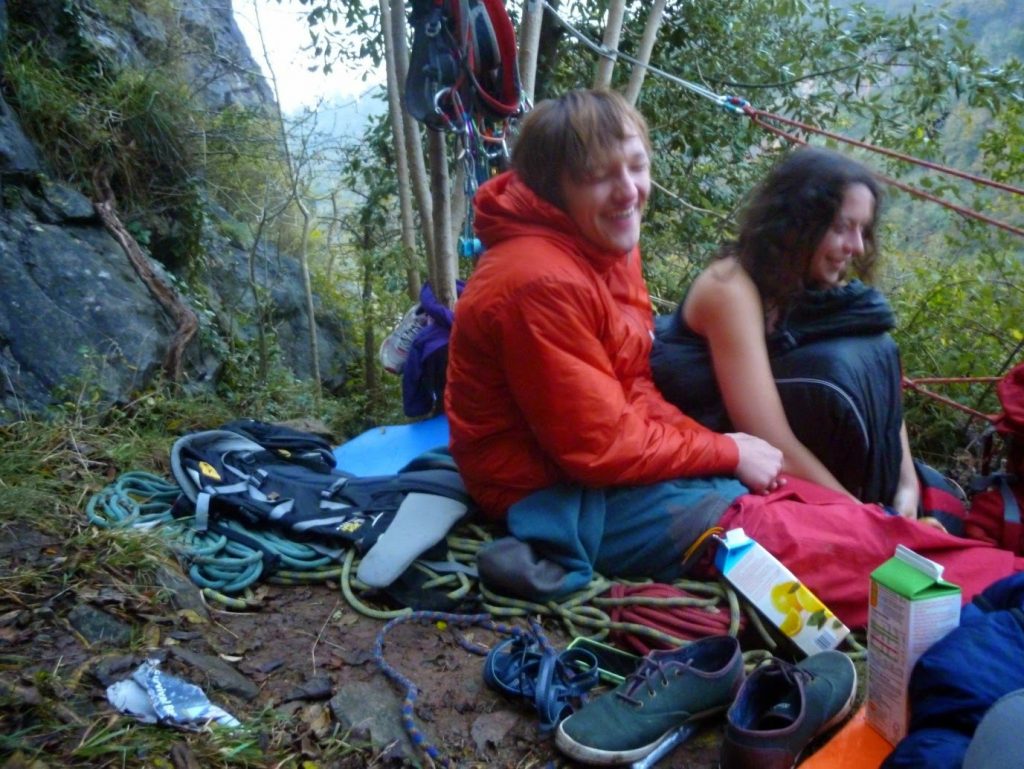 (Fit For A King:
Laurence chuckles off the ‘most comfortable night’s sleep he’s ever had’) 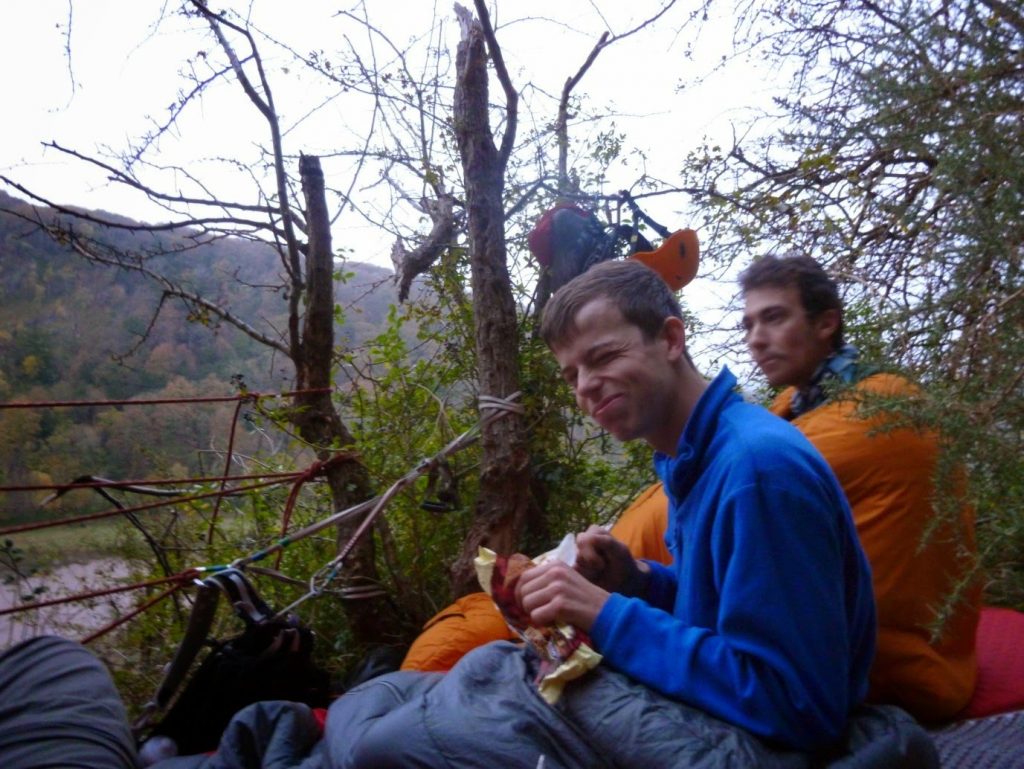 (Bright Eyed and
Bushy Tailed: Team Kit and Safety brush themselves off and prepare for the morning
climbs to lectures)
Waking with the sunrise, Thom and I assessed the situation
and decided to boldly solo it to our 9am lectures. Simultaneously on the climb
to the left of us, Duncan bagged his first outdoor lead, and Laurence and Emily
followed him safely up it a little while later. Here’s a photo of him sat
belaying at the top: 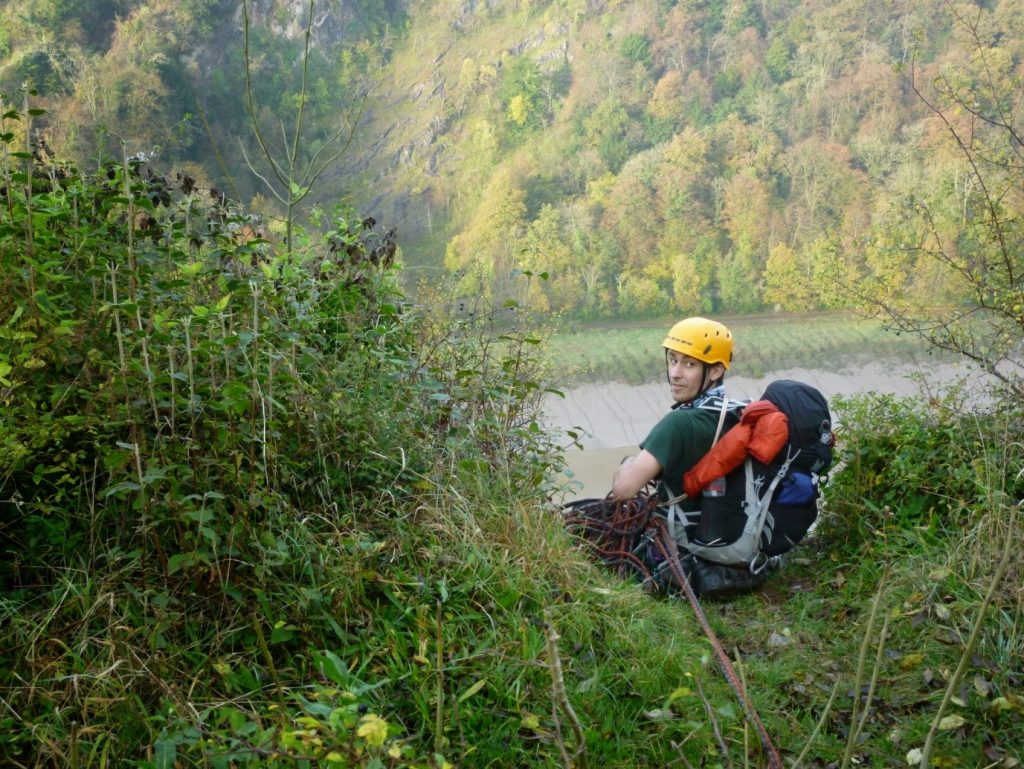 I can honestly
recommend the experience – we had a great time, became closer as chums, and
really capitalised on the weather whilst simultaneously not taking any time out
of our busy university timetables. A perfect combination of type 1 and type 2
fun, and an excellent way to spend 12 hrs.
Finally,
thank you for reading patiently: here is the nudity you’ve all been waiting
for: 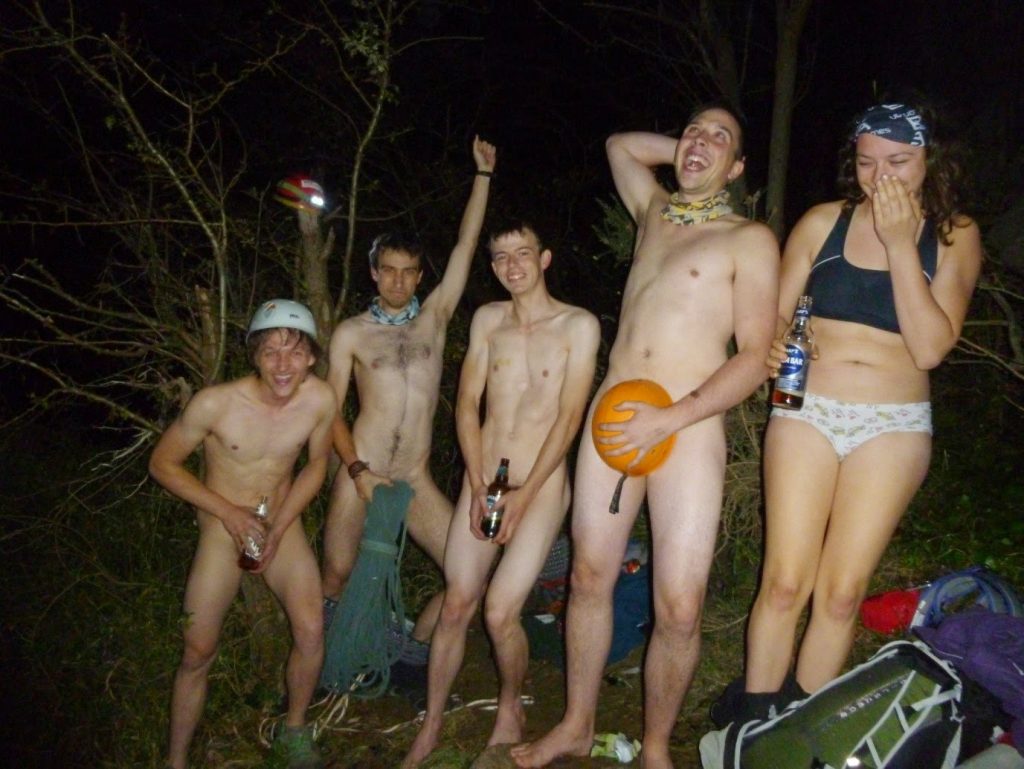