Mountain noob to solo hiker: an adventure in the Lake District

Before joining UBES three years ago, the only map I knew how to use was Google Maps. I’d been up a total of one mountain, Snowdon, which I’d been practically dragged up as part of a school group. I didn’t know anything about rock climbing, other than that the point was to get as high as you could – maybe? The idea of going on a solo camping and hiking trip would have been insane three years ago. But that’s what I’ve just done, and the fact that I managed it is down to the skills I’ve learnt over the last three years of UBES.

Jealous of hearing about everyone’s super fun adventures in the Pyrenees and Snowdonia whilst I’d been working all summer, I decided that the simple solution was to go camping in the Lake District for a few days. Attempts to find another UBESter to come along failed. No matter, I thought. I’d go it alone. The idea of just taking off to the Lakes for a few days by myself, and to go hiking of all things, was mildly terrifying to me, and even more so to various relatives. That wasn’t going to stop me though.

After a nice long journey up the M6 featuring a lot of traffic, I got to my campsite. 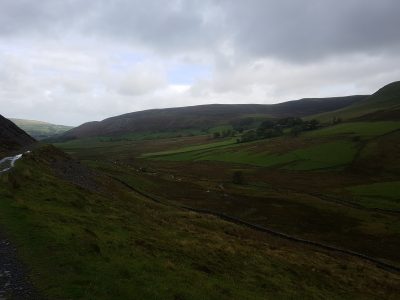 The view from the Cumbrian Way

Whilst wild camping was very tempting, I felt I was already pushing myself enough going solo – plus, I like having actual toilets. I was staying at Kestrel Lodge campsite, a lovely little place near Bassenthwaite, right in the shadow of Skiddaw. It was early evening when I got there and chucking it down with rain, so I quickly pitched my tent and got dinner cooking. It was only rice in a packet, but it was warm, and I was not, so it was good enough. Then I settled down in my tent for the evening. The traditional UBES organised fun doesn’t really work with only one person, so I settled for some good old Pokémon instead.

The next morning, I got the day started with some very questionable porridge-in-a-pot (even more questionable than the most questionable of UBES porridges!) and packed up my day pack ready for a day’s hiking. The plan was to go up Skiddaw, a mountain I’d somehow never done despite multiple Lakes trips under my belt. Luckily for me, the Cumbrian Way passes right next to the campsite, and heads past Skiddaw. I had a little bit of trouble finding the Cumbrian Way as it passed unmarked through the fields I was staying in, but soon tracked it down and was on my way. It then turned into a tarmacked track that began gently ascending towards Skiddaw, so I had a nice easy start to the day’s walking and the views were great! 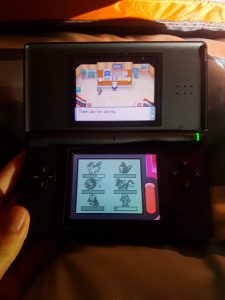 An alternative to organised fun

The Cumbrian Way doesn’t actually go up Skiddaw, so at some point I knew I had to turn off. When I reached what I thought was the right path, I pulled out my map and using the features around me, confirmed that yes, this was where I needed to leave the Cumbrian Way. So I started climbing. The path I was taking would take me up over Bakestall, another of the Wainwrights, before reaching Skiddaw’s summit. As I was climbing this (often quite steep) path, one of the benefits of solo hiking became clear. I’ve never been one of the fastest or fittest UBESters, so flying solo meant that I could take the ascent at my own pace and stop as often as I wanted to. But I did miss having people with me – there’s nothing quite like climbing a mountain with a group of awesome people, and the bizarre conversations that take your mind off how much your legs are aching! 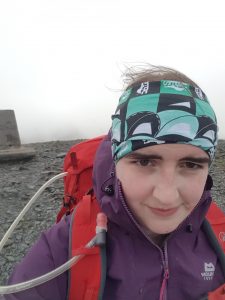 After a lot of uphill walking, I got to the summit of Bakestall. Another quick map check told me that I wasn’t far from the summit of Skiddaw, so I kept going, despite the wind’s best efforts to stop me. Said wind made the last bit of steep ascent more difficult, but I successfully made it to the summit. As I’d been expecting from the weather forecast, the summit was unfortunately surrounded by clouds, so there weren’t really any views to speak of. Undeterred, I took my obligatory summit selfie and set off down the other side of Skiddaw.

The wind being as strong as it was had put somewhat of a spanner in the works for my descent plan. Originally I’d been planning to descend via Ullock Pike, and the incredibly fun looking ridge that it was part of. It looked to be a rather narrow ridge though. Attempting that in high winds wouldn’t really be keeping to the promise I’d made to several terrified relatives not to do anything stupid… It was time for a plan B. Getting my trusty map out again, I decided that the best option would be to loop back around the other way, and descend via Sale How, to then rejoin the Cumbrian Way. It would mean retracing my steps once I got back to where I’d originally turned off, but that was infinitely more preferable than being blown off the side of a mountain.

Apart from seeing several cute dogs, the way down was relatively uneventful. Once I got back onto the Cumbrian Way, I made fairly good time as it’s a good path – except for the fields right by my campsite, where I got a bit lost again! Only temporarily though, and finally I got back to my tent, where I could make myself a nice cup of tea. The plan for dinner had been another meal in a packet, but I ended up going to a pub in the village instead where the food was of considerably better quality. 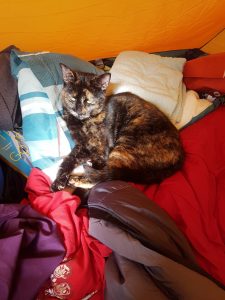 I did have another walk planned for the next day, which would have taken in the summits of Catbells and High Spy, before descending to Dalehead Tarn and returning along the valley. When I woke up in the morning though, everything still hurt – unsurprising given that this was the first time I’d been hiking since February, due to a variety of boring reasons. Instead, I wandered around Keswick spending far too much money on ice cream and jigsaw puzzles before going back to relax in my tent with my new best friend, a lovely tortoiseshell cat who’d decided that my tent was also hers. Then the next day, just like that, my trip was over and it was time to battle the M6 traffic once more to get back to Bristol.

All in all, I’m fairly confident that had I not joined UBES three years ago, this trip would never have happened. More than just the trips (which it must be said are incredibly fun), they are able to take complete mountain noobs like me and give them the skills they need to stay safe and have fun in the outdoors. Through UBES I’ve completed Navigation Training days in the Brecons, been taught to climb, attended many a rope skills session learning how to keep myself safe when halfway up a climbing route, and more recently I’ve even passed these skills on teaching the next generation of UBESters to climb! More than that though, UBES is a community filled with wonderful people that I’ve been able to learn from, and have an amazing time doing it with. Nothing beats climbing a mountain with these people in the day, then heading back to the bunkhouse for some suspended sock wrestling and a game of rachet screwdriver. Wondering what I mean by that? There’s only one way to find out – join us on a trip!