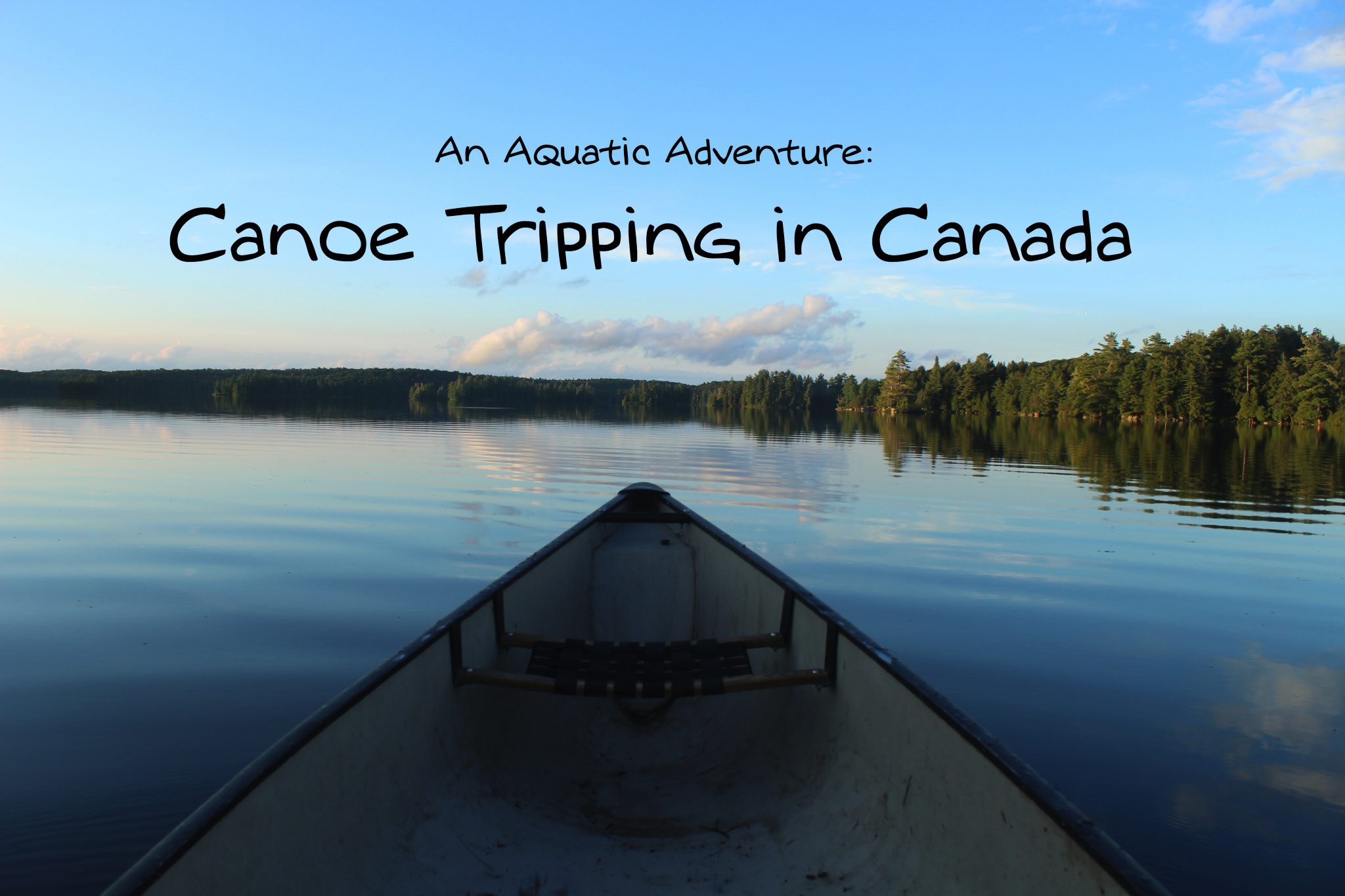 When UBES does an expedition, it almost always involves a mountain. Whilst I have a love for the mountains just like any ordinary UBESter, this summer I thought I’d try something new, and embark on a different type of expedition: canoe tripping. Swapping mountains for lakes and hiking poles for paddles, I tried my hand at a very Canadian type of expedition, shockingly, that didn’t involve any mountains whatsoever.

Armed with a vague history of kayaking, hiking and some experience leading trips for UBES, in early June I boarded a flight bound for Toronto, Canada. I eventually found myself in Algonquin Provincial Park, a world-class tripping destination. It was my job to introduce kids of all ages to the wilderness, paddling from lake to lake, camping under the stars and cooking over a fire.

As Idyllic as this might sound, and as idyllic as it was, this certainly did not come without its fair share of challenges. From difficult kids to 6-days straight of torrential thunderstorms, canoe tripping can be tough and was certainly a steep learning curve. Despite this, it gave me the most rewarding summer of my life, and opened my eyes to an entirely new type of expedition. Given how much fun I’ve had this summer, and UBES’s distinct lack of aquatic expeditions, I thought that I’d write a blog post to explain what a proper Canadian canoe trip involves. Hopefully, this might persuade another UBESter to pack their bags, head out to Canada and experience canoe tripping for themselves.

Whilst the hills of the Lake District or Snowdonia are remote, in Algonquin you are truly in a wilderness. You are almost always inaccessible by road, at least 3 hours from help by float plane, and a day or two by any other method. On top of this you are in a truly untouched environment, surrounded by a forest filled with birds, beavers, moose and bears. 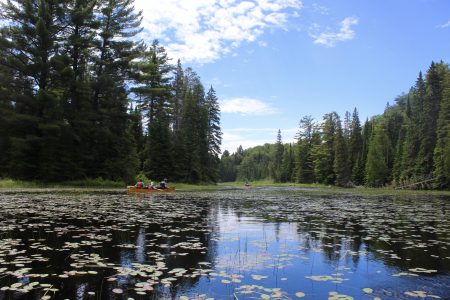 Creeks were definitely the most peaceful places in Algonquin. This is where you’d see the most wildlife.

The wildlife and scenery are incredible, and make every challenging moment worth it. There is nothing more peaceful than paddling a creek filled with lilies and lotus flowers, listening to the call of the Chickadee. Although having the responsibility of 8 children in such a remote environment can be daunting, staying safe in the wilderness is relatively easy. 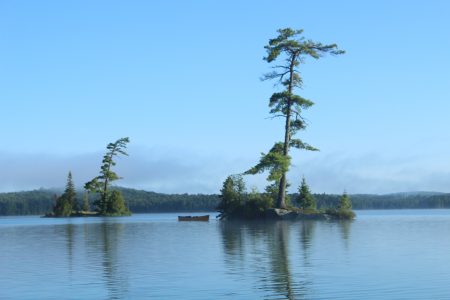 A ‘Bear Canoe’: an important part of bear safety. To stop a hungry bear invading your campsite, all your food and toiletries are dumped in a canoe overnight. This is tied to the land or (in this case) an island at least 200m away from where you are staying. 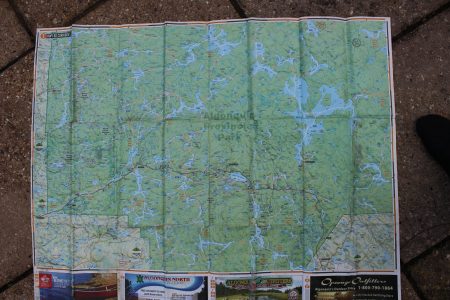 All UBESters love maps. This is a canoe trail map showing around half of Algonquin. Routes are highlighted in white, and the portages are shown as orange lines.

Algonquin Park contains well over one thousand lakes, and covers an area that is 7,653.45km2 (thats almost five times the size of London). Whist you can paddle between some of the lakes, most require a ‘portage’ to get between. They can vary, from 200m of practically paved paths to almost 3km of swampy, hilly and rocky terrain. Whilst this still might sound easy, add a 50-pound canoe on your head, a 50-pound backpack, and crying children turtling on the floor, and it can get tough to say the least. Not only that, but you’re usually double (or triple) backing to get packs and food barrels the kids couldn’t carry, whilst fighting through more bugs than you can imagine. 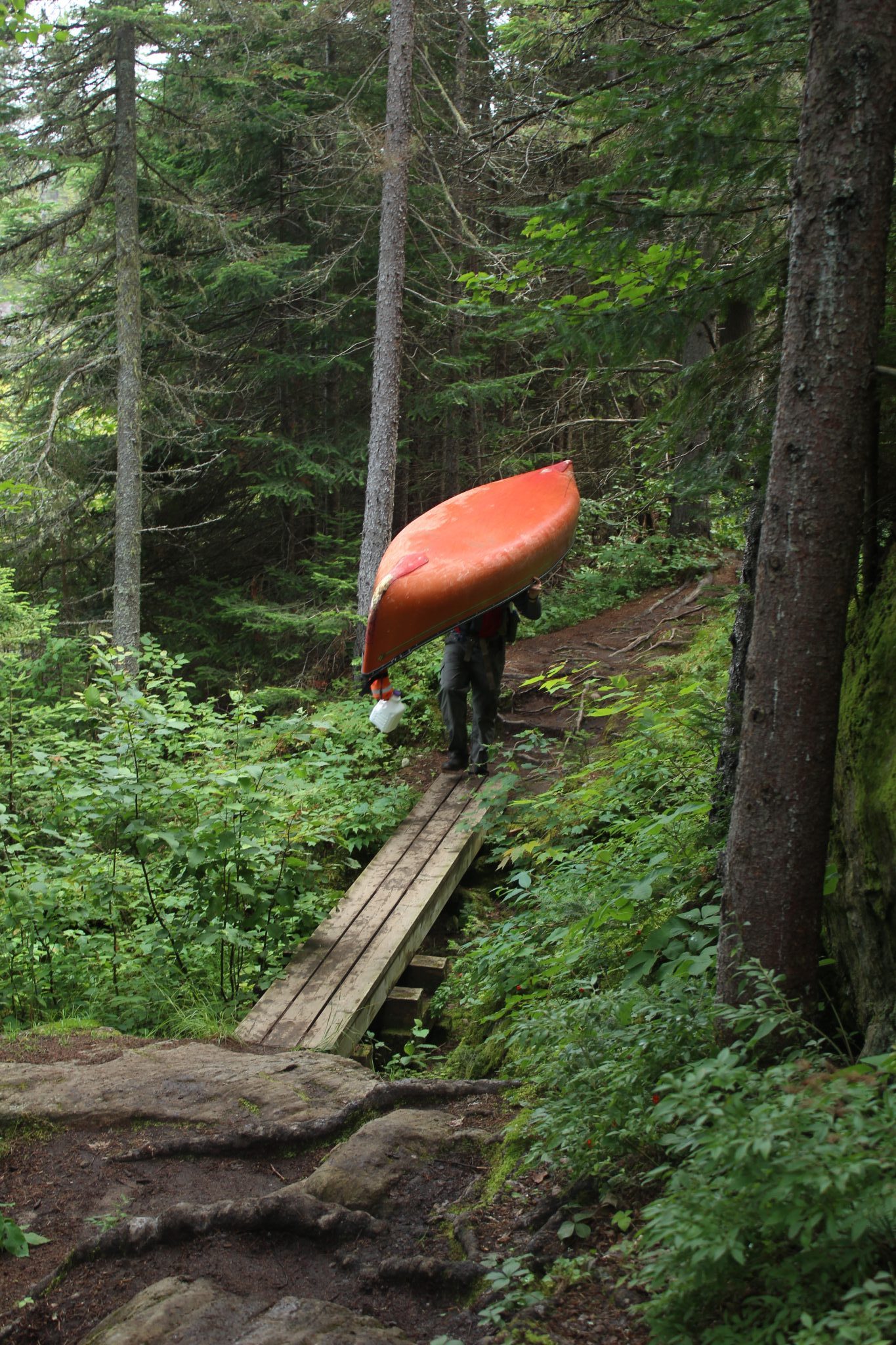 This is what portaging looks like. Whilst this bridge looks pretty well maintained, many were little more than an upturned log, which made it pretty hard to cross when you can’t see where you’re going… 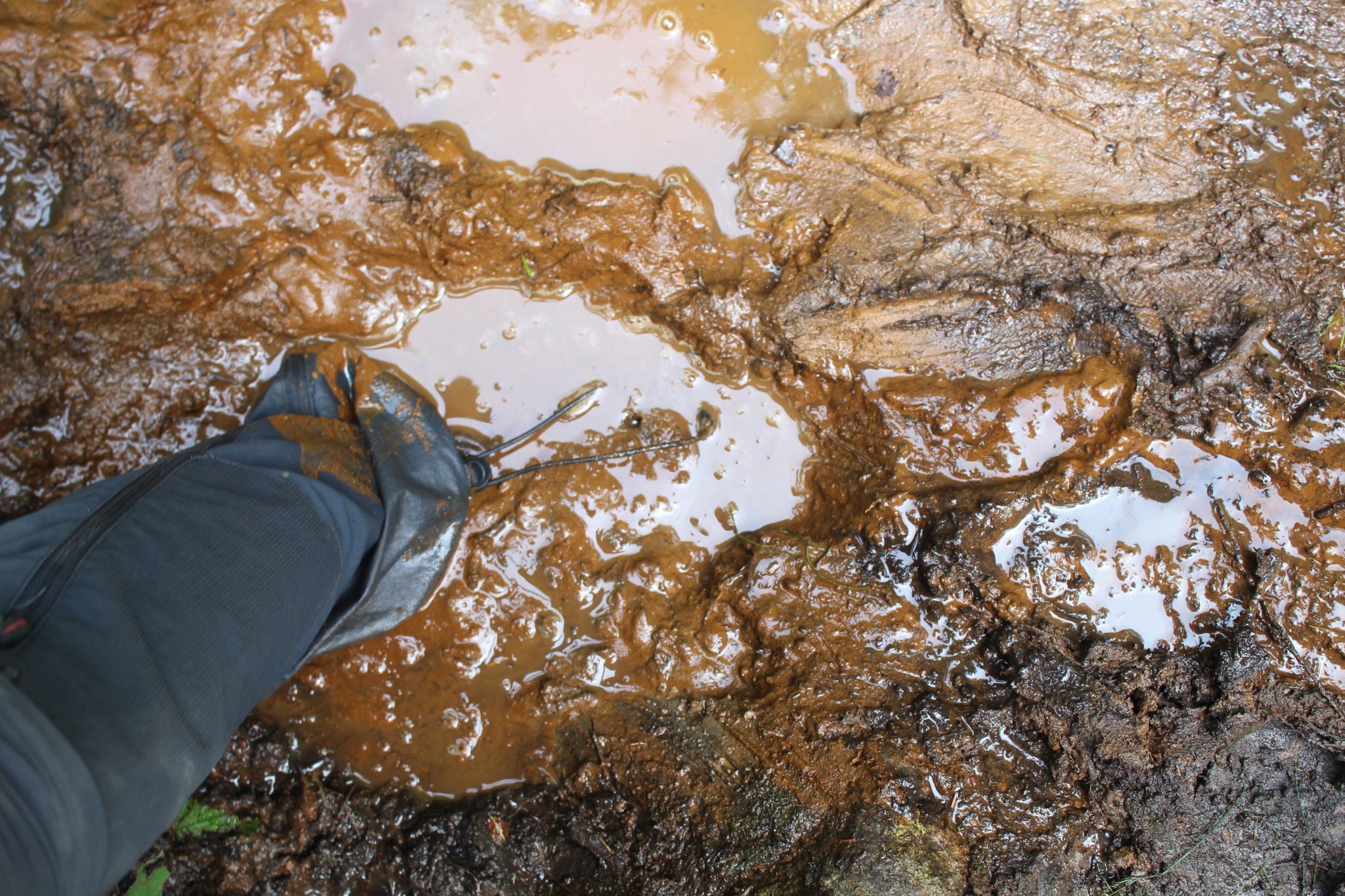 Loosing a shoe in the mud. Often the portages could be a kilometre attempting to carry canoes through mud whilst struggling to retain your shoes. At its worst, the mud went almost up to my hip. 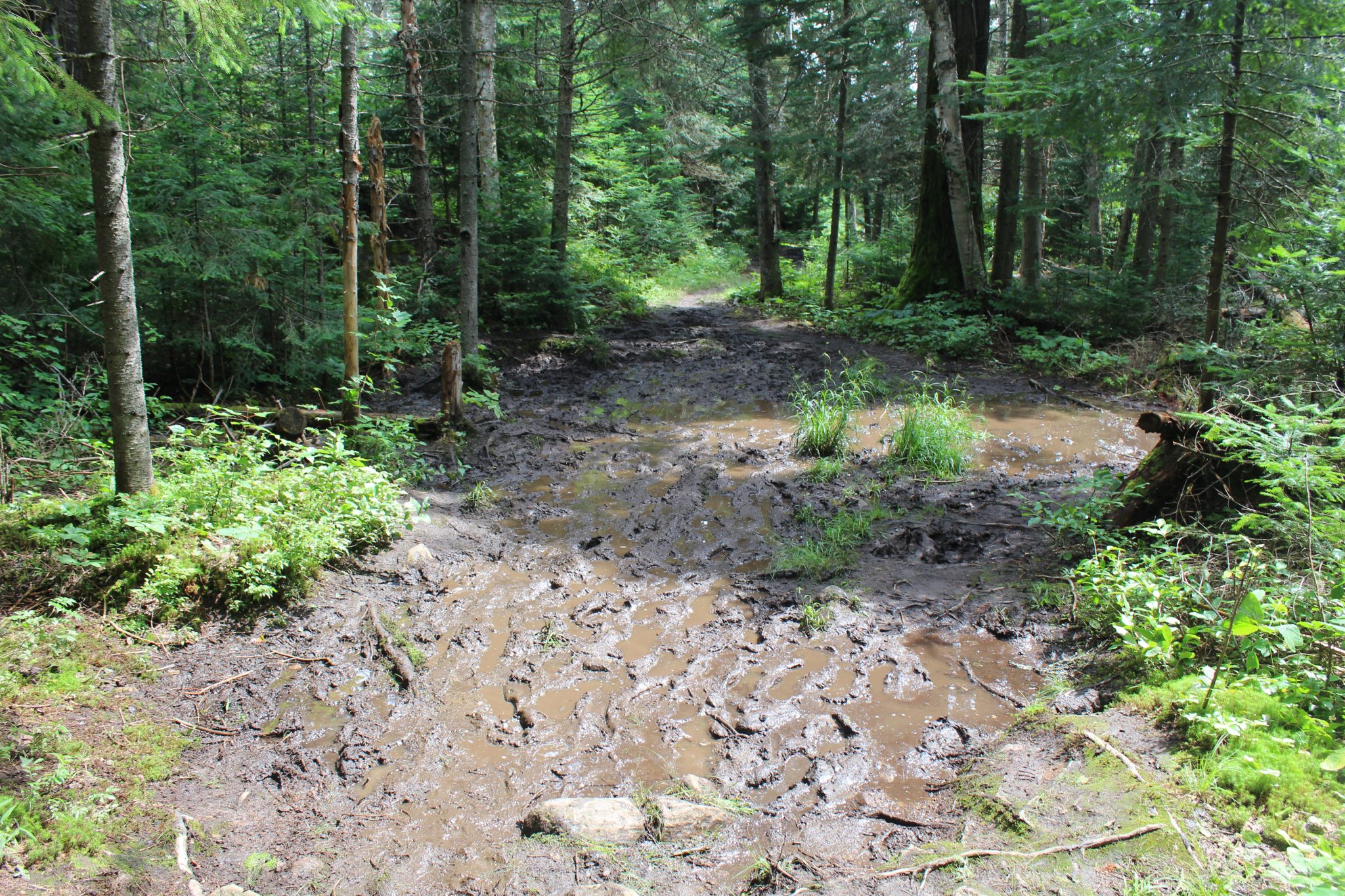 A common sight. So much mud.

Whilst portaging can be hard, it is certainly rewarding. It can even serve as a well-needed break from paddling. My final trip of the year was a 120km push trip paddling non-stop dawn-till-dusk for 29hrs straight. We barely stopped to sleep. Then, even a 3k portage was a nice break. 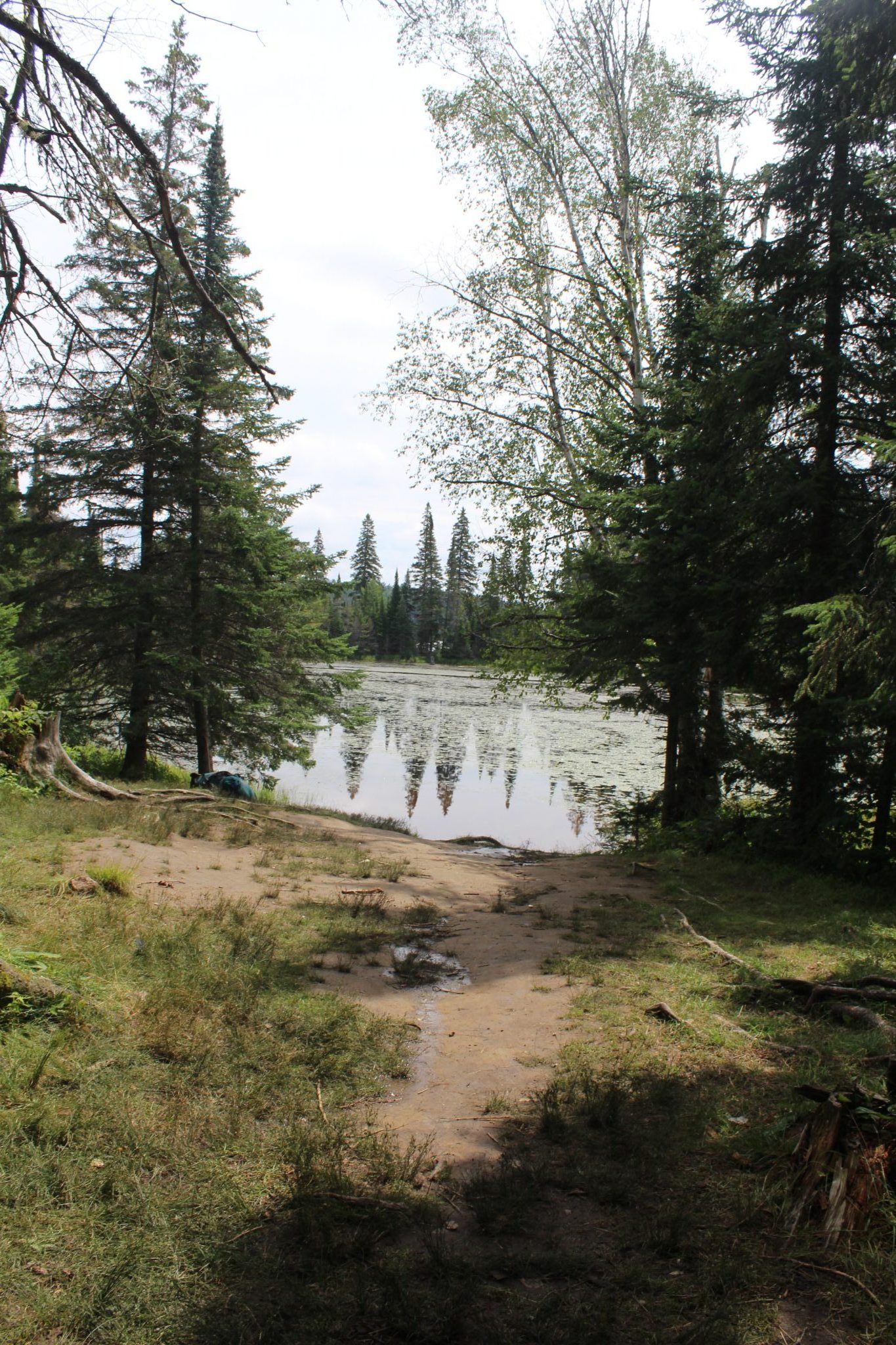 Such a relief: the end of a portage.

On an ordinary trip, you’d be moving anywhere between 10km and 30km a day. You’re given a permit, which allows you to stay on any one of many private campsites on a specified lake. These can have secluded beaches, beautiful stone fireplaces, or be on its own peninsula. There is even a campsite is in the ruins of an abandoned 1950s hotel. On the other hand, they can be cold, exposed or have enough mosquitos and blackflies to kill a small dog. So picking a campsite can be good fun, but you need to learn quickly how to pick a good one. 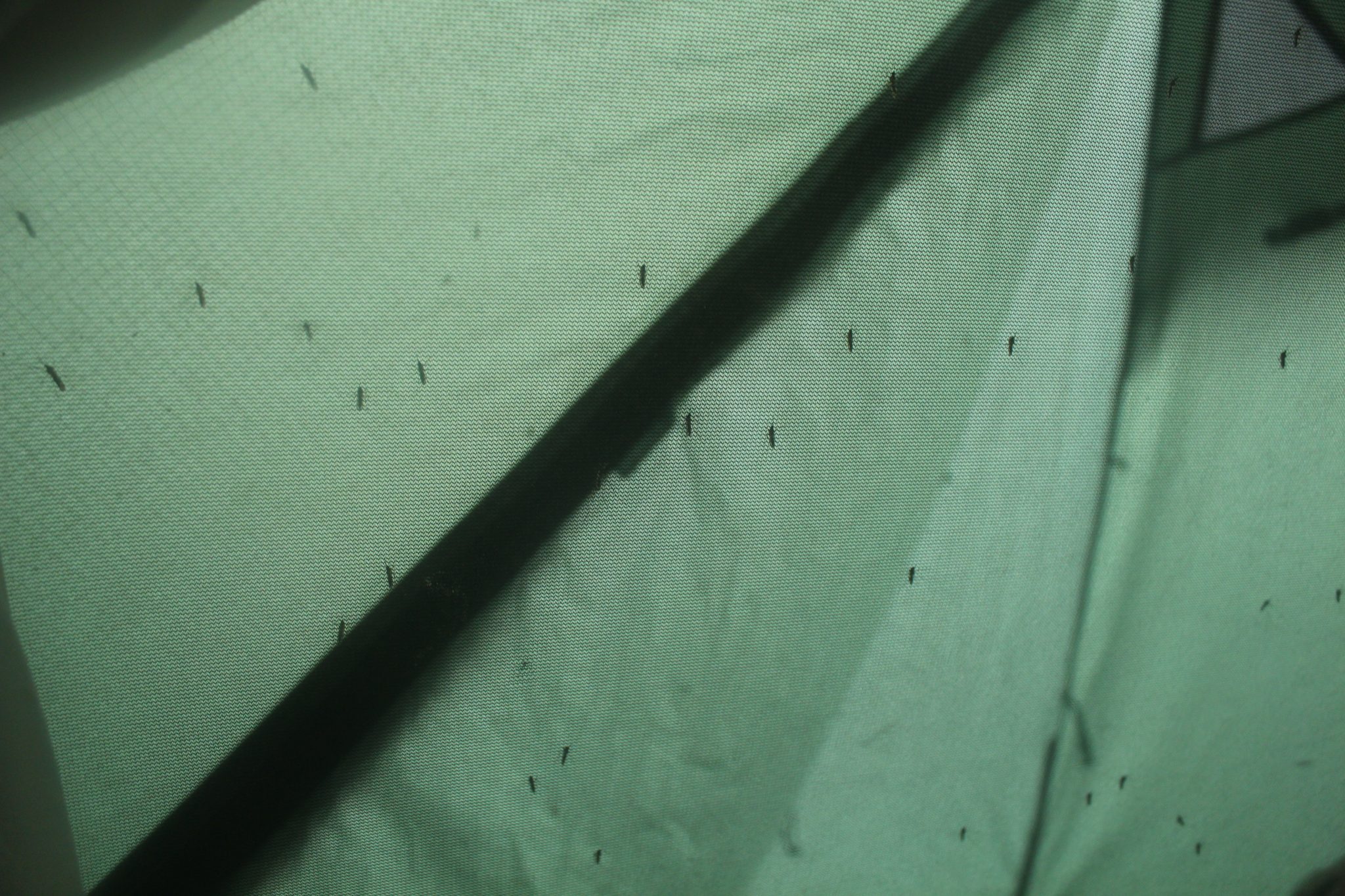 It’s hard to see, but on this campsite there were enough bugs to create a swarm when you removed the outer tent!

Each campsite comes equipped with a stone built fireplace, and usually (but not always) a grill to cook over. Teaching the kids to cook ended up being one of my favourite activities on trip. You can cook almost anything, and as someone who is used to couscous and cuppa soup as is standard on a UBES backpacking trip, my mind was blown by how good it could taste. For dinner we’d be eating pizza, chilli, quesiddillas or pasta; with caramel corn, s’mores or brownie mix for pudding. Breakfast could also be as delicious, often making pancakes or french toast with maple syrup. 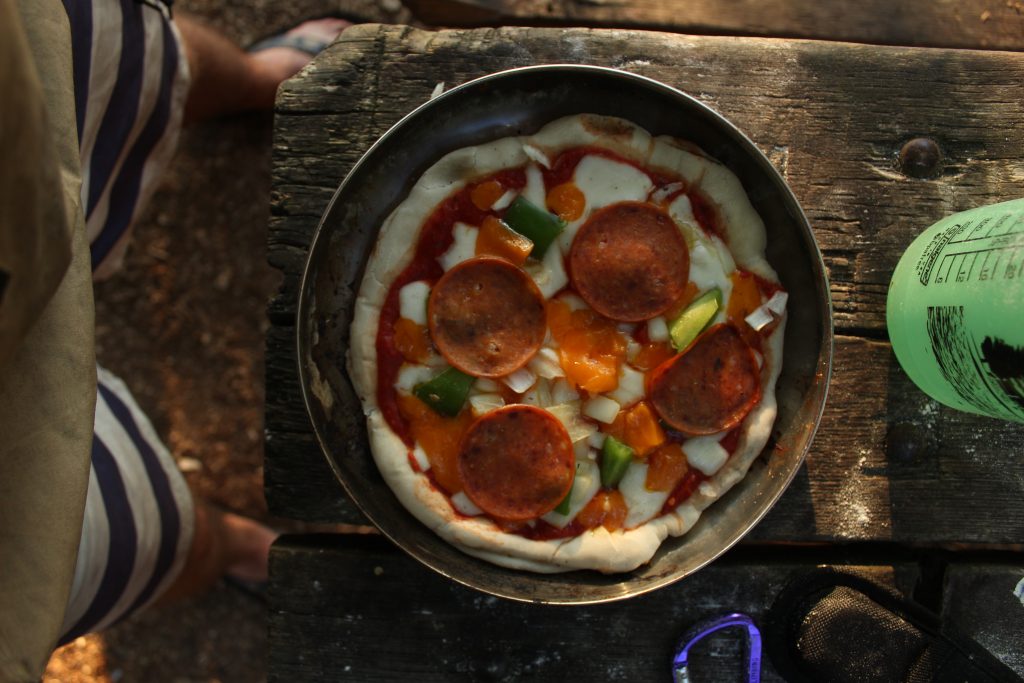 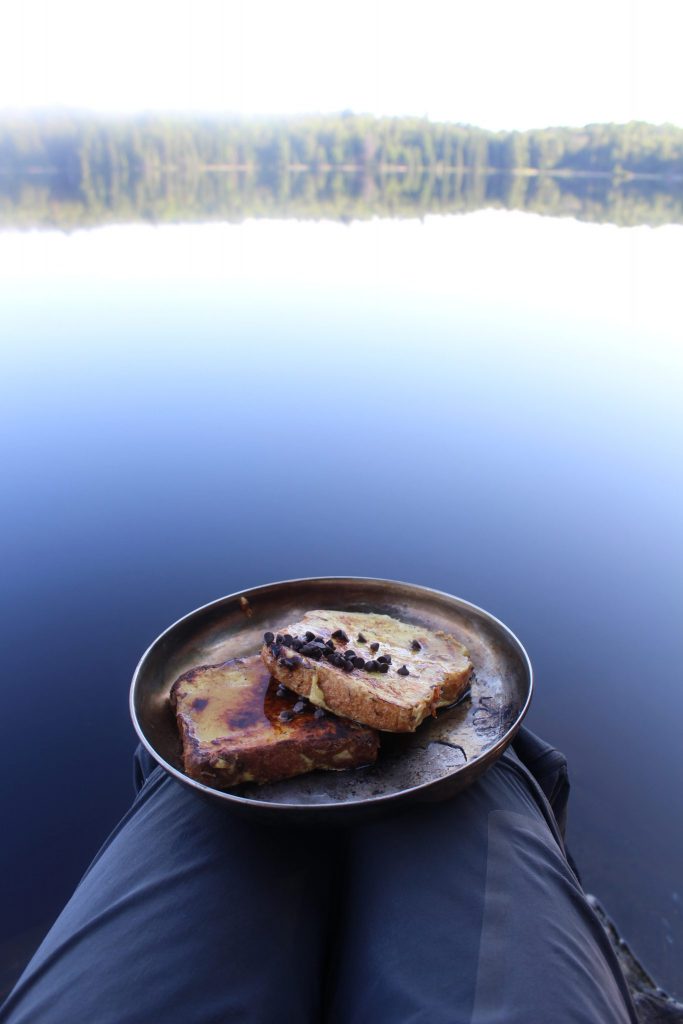 Breakfast by the lake: french toast and maple syrup. Insta-worthy?

To make these campsites even better, if pooing in an hole isn’t your thing, the Canadians have come up with an ingenious solution: a thunder-box (known lovingly by the kids as the ‘treasure-box’). These are essentially a wooden toilet seat placed over a hole, maintained by park rangers (a job I know I wouldn’t want). Whilst they aren’t a whole lot better, it makes going for a number two that little bit more civilised.

Over the 10 weeks I’ve been in Canada, i’d certainly say I got my fair share of weather. Some trips were beautiful, with 4 days of glorious sunshine. Each day there’d be time to go swimming and chill out in the beautiful weather. Other trips were awful. Waking up for 6-days straight with soggy tents and damp raingear is not fun as we all know. This is especially true when its raining torrentially, and you’re attempting to build a fire with wood that might as well have been left in a bath for a few days it’s so wet. Cooking when it is bad weather can be a challenge. 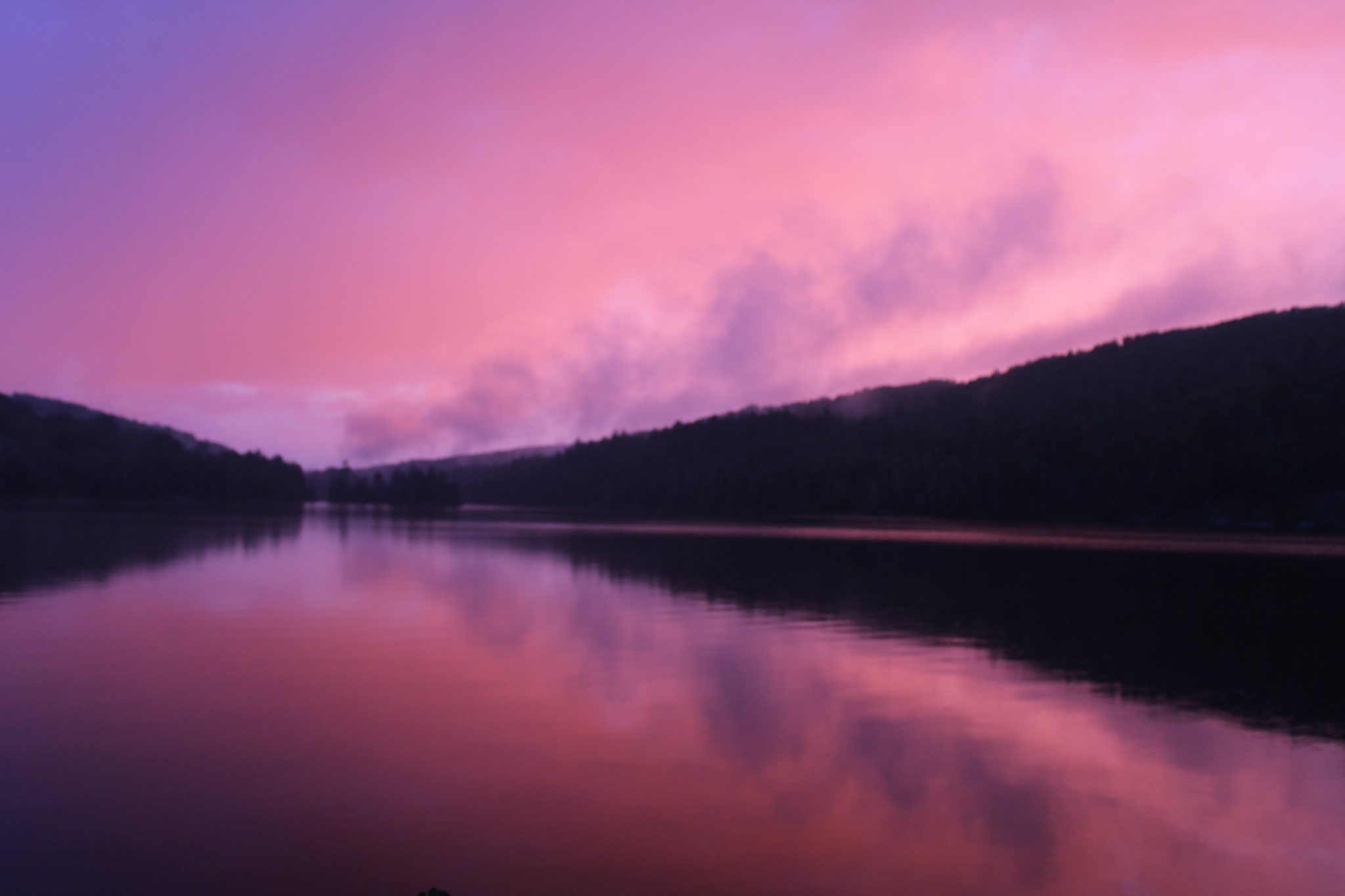 The sunset as a storm front was rolling in. As beautiful as this was, the rain made cooking a little tricky…

I’d say that it rained as often as at home in Ontario this year, though I’ve been told that this year was a particularly wet summer. The rain in Canada is much heavier than at home. There is often thunderstorms, which can bubble up throughout the day and that tend to make for a dramatic nights sleep.

Canoe tripping in Canada is certainly something I never expected to be doing myself, but I’m certainly glad I’ve done it. You get to meet, work with and teach some incredible people. Perhaps the most rewarding part is that you’re showing kids the wilderness and wildlife often for the first time. This is definitely something that changes you.

If you’re up for taking a bold step off the mountains and into a canoe, I’d 100% recommend a summer in Canada. Choosing to working as a Canoe Tripper is incredible and is something you would never forget. André Amiro at Camp Arowhon (my supervisor) is already taking applications for next summer, so if you think you’d be right to give it a go you can apply at the website below: 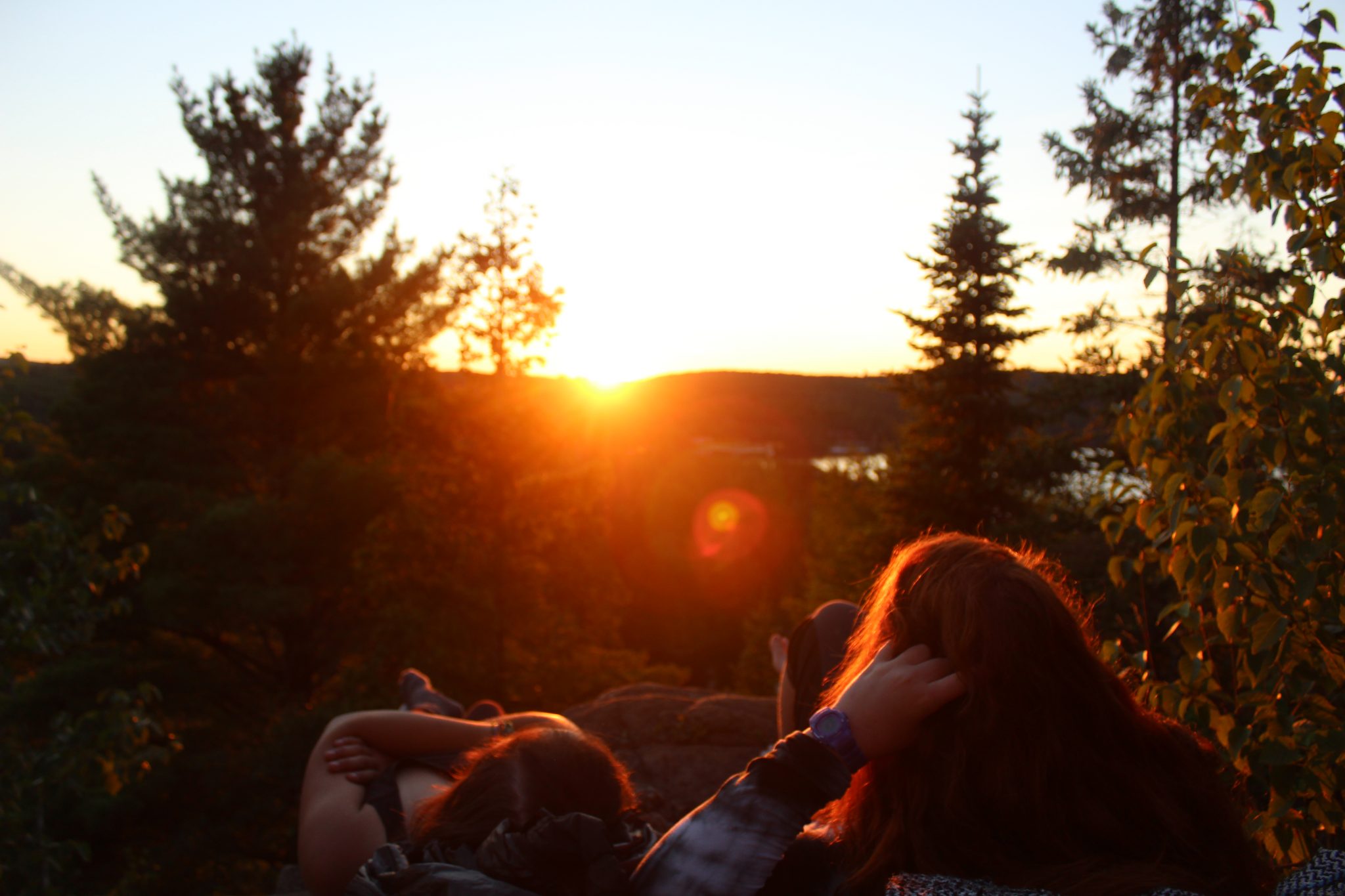 One of many unforgettable sunsets.