It was 12 noon on Tuesday 27th December 2016. Ubesters, gleeful in anticipation of the snowy Scottish highlands, had begun to assemble in the familiar haven of a Wetherspoons pub in Carlisle, having driven in their respective cars from various regions of the country. Sympathy was definitely felt for the southerners among us, some of whom had to endure a 15 hour-long car journey before reaching the lovely town of Fort William, known as ‘The Gateway to Ben Nevis’. As talk led onto gear, ice-climbing and all-things-snow, excitement was building, and we continued on up into the very depths of the North, enjoying the scenic views and Peter’s Disney-orientated music playlist.

On arrival at the Calluna bunkhouse, the team of unwearying ubesters began busying themselves, emptying the van and stocking up the shelves with a very pleasing amount of cheese and pickle. We all divided ourselves between the assortment of cosy rooms. It transpired that I had (arguably) picked the best roommate, Darius, whose alarm of choice every day without fail was ‘feliz navidad’- a wakeup call that I missed surprisingly a lot on our return.

That night, those of us who would be taking part in the 2-day winter skills course congregated in the lounge, and were introduced to our two leaders- Hannah and Richard. It must be noted here that Richard had exceptionally glossy hair and appeared to me the ultimate rugged and weather-beaten mountaineer. Those of us who needed them then went and tried on B2 boots and picked up a pair of crampons and, feeling understandably cool and mountainous, went to bed. A special mention must also go to Cat, who not only beautifully prepared, but also successfully transported 31 portions’ worth of vegetable tagine up the majority of the length of the UK for us to enjoy for dinner. Cat, thank you- your organisation was awe-inspiring.

The next day, the winter skills crew started early, and after a brief interlude as social sec Dec realised he’d forgotten a key piece of gear- a waterproof coat- drove over to the base of Creag Meagaidh where we would spend the day, learning the essentials when it comes to winter-mountaineering and thoroughly enjoying the opportunity to slide down various snowy slopes while practising ice-axe arrests. We were also taught how best to move in wintry conditions and how to test if the snow is safe to walk on. We were even famous for a day and appeared on the SAIS Creag Meagaidh blog: 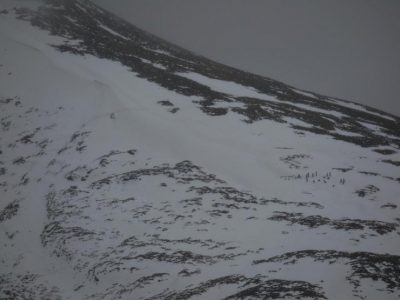 We were papped! (We are the small figures to the right) – SAIS

The second day of the winter skills course saw us going on a ‘journey’ on Ben Nevis (it is really quite large). We were able to take lots of impressive photos on our voyage up Number 3 Gully: 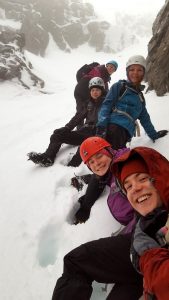 Feeling epic on the way up Number 3 Gully- Tom Kilcommons 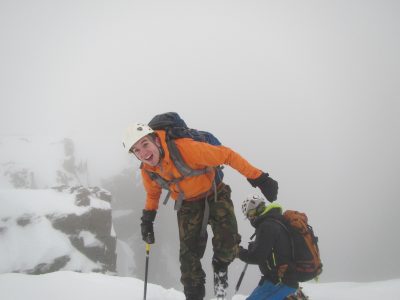 Unfortunately the following day presented itself with quite miserable weather, and so none of us were able to make it into the mountains. Nevertheless, the day most certainly was not wasted as we wandered over to the ‘Steall Falls’, which very excitingly feature in ‘Harry Potter and the Goblet of Fire’. I personally relished the chance to be a wizard for the morning. We then hurried back to the Bunkhouse in time to prepare our Roast Dinner for our ‘Fake New Year’s Eve’- this was necessary as the weather was due to improve on New Year’s Day, and few of us fancied being in the mountains hungover. The evening took quite a sudden turn- one moment we were all gorging on roast potatoes and stuffing, dancing to the best of our abilities and bringing in the (fake) New Year, the next, the Bunkhouse floor was covered in water- the ensuing day was spent drying said floor with newspaper and hairdryers (see Peter for details). 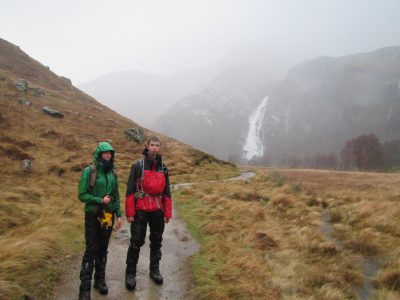 It was a bit moist 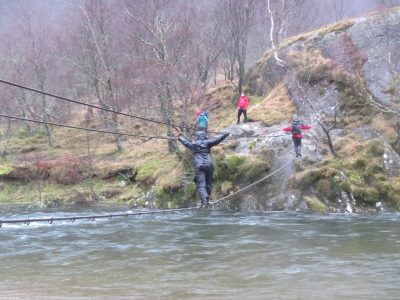 The final 2 days were excellent, with the Sunday being particularly glorious and sunny. We all enjoyed spectacular views, no matter where we’d spent the day. 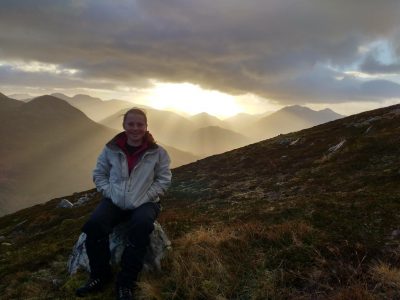 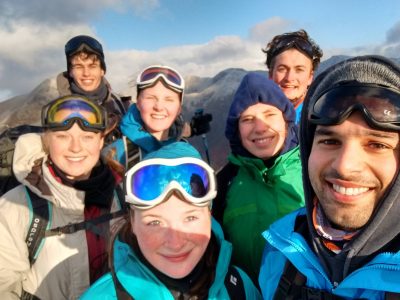 On the final day, I experienced my first ‘Epic’, and epic it most certainly was. After spending a good 45 minutes at the beginning of the walk trying to cross a river, we proceeded to summit the four Munros on the Ring of Steall, which was a challenge and a half to say the least but equally incredibly gratifying, despite the fact we got absolutely no views whatsoever due to the snow/sleet/ cloud. We just had to use our imaginations! 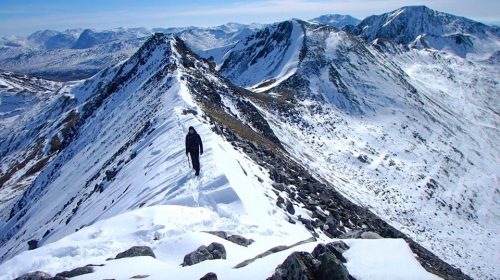 The views we could have had 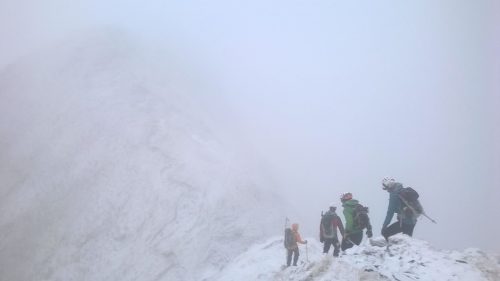 The views we had (oh well!) – Catherine Easdon

Other adventures of the day included summiting Aonach Mor and completing the Ballachulish Horseshoe: 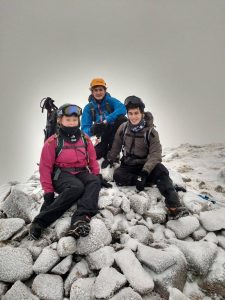 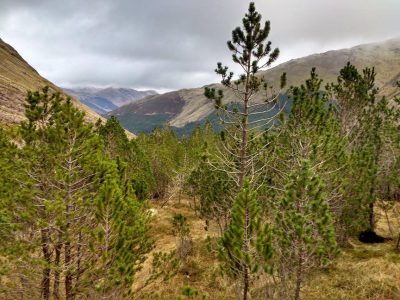 Other noteworthy happenings of the trip include:

– Being bought some whisky by a nice Scottish man in a pub
– Luise questioning rugged Richard on his favourite type of tree
– Trips to Aldi which consisted of Clara and I racing enthusiastically round the aisles, filling our trolleys with a plethora of unnecessary items, before putting them all back when we got to the checkout
– A cosy night-in with Gordon Buchanan and a pack of wolves on BBC Two
– Being blown over by the wind repeatedly on the way up Beinn na Caillich
– Dabbing with ice axes
– Introducing a new addition to the UBES menu- cheese and pickle canapés
– Evenings spent playing bananagrams and Settlers of Catan
– Being taught some Scottish slang by Munro

A huge thank you goes to Cat and John for doing such a fab job of organising the trip and making the transition into 2017 so memorable.

Also take a look at this video that Jono made of the trip: