Welcome to a blog post about the best UBES trip of the year. 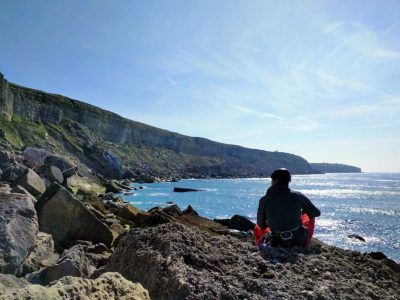 Beautiful weather on the Jurassic Coast

Lets be honest, the initial drive in UBES trips can get a little tedious at times. Yes you may may love belting out all your favorite cheese along the M5, but there is such a thing as too much of a good thing.  The drive to Portland is the perfect length at around 2 1/2 hours, which is enough to get all the classics in without driving you up the wall. 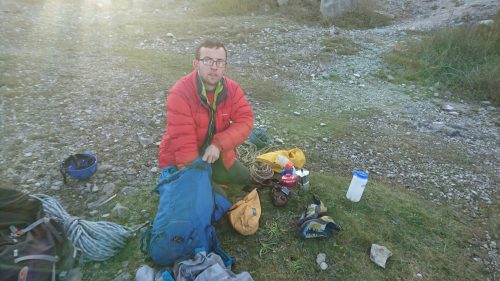 Awaiting your arrival is award winning “The Codfathers“, they even do battered mars bars for the connoisseurs among you. In addition the earlier arrival means more sleep which makes getting up a bit easier.

Obviously the day started with the amazing “Euphoria” and UBES porridge. Eager to get climbing we raced off to Cheyne Wears Area, and after a short demonstration from Jono and Ash everyone got started. Lovely weather matched with equally lovely climbing, a slack line was set up and good times were had. As a result certain UBESters became more adventurous and started pushing themselves harder. After a route revealed itself as Cayenne level spicy on some flowstone, Jono was forced to bust out the clipstick. It was a humourous reminder not to bite off more than we could chew. 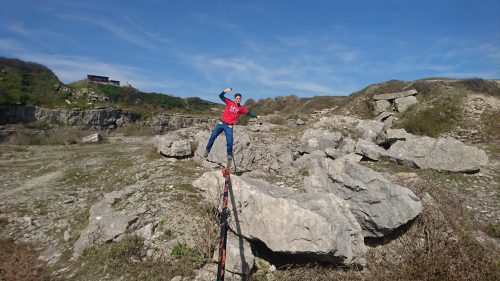 Sam showing us how it’s done on the slackline

As the day progressed we started to spread out looking for more climbs. Slowly more and more UBESters found their way to The Cuttings. Having acquainted themselves with limestone climbing in the morning everyone was ready for the taller climbs found in The Cuttings. The change of area was a good move as there were some decent climbs, even though the extra height made things a little gripping. However “Cheese and Pickle” a short 4c with a irresistible name turned out a complete sandbag, and proved itself to be painfully spicy.

The day was starting to come to a close, so we moved on to The Cuttings Boulder Fields. Things started to get even more relaxed with some casual bouldering, and a beautiful sunset signalled time for us to leave. But you all know sunset doesn’t mean the end of UBES activities, there was organised fun to be had. Because of the nature of climbing trips, the traversing based fun tends to get a little more competitive. But things may have gotten a little ambitious when the President declared he would table traverse with one arm, he did not succeed.

Perhaps a little worse for wear but still in good spirits and hankering to get out climbing again. This time we would be walking to Blacknor South, where in the shade under the cliffs after being spoilt by clear skies it started to get a little chilly. It soon warmed up and we spread out again, to Blacknor Beach and The Battleship. 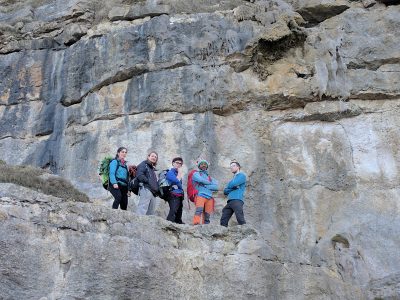 Could this be the beginning of a UBES band?

The climbing in Blacknor South was a little different, there was much more flint in the cliffs. Flint makes for bomber holds, but is sharp and absolutely shreds your hands if you slip. Fortunately over at The Battleship and Blacknor Beach things were better. Blacknor Beach, full of giant slabs even boasts 3 of the top 5 climbs in Portland. As it turns out 150 million year old fossils make great hand holds, and the slabs are chocked full of them. 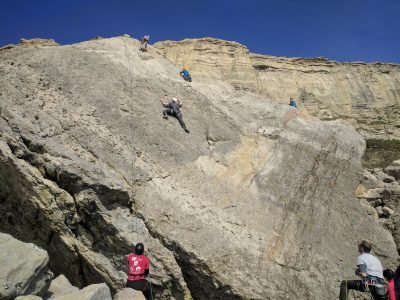 A big slab at Blacknor Beach

It continued to be a magnificent day, so good in fact a few of us caught the sun a little. Even though there were no lake bagging opportunities a couple people had a dip in the sea to cool off. 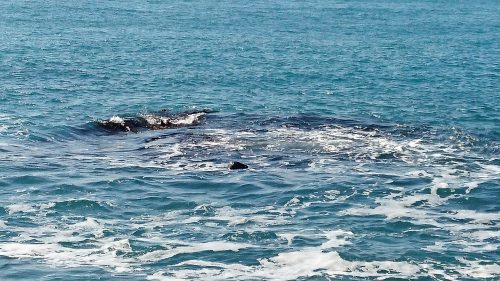 We even had a Sea Lion join us for a bit

All in all it was a great trip, I’m sure everyone had a fantastic time and has hopefully been inspired to continue climbing outdoors.

Many thanks to Phil and Ash for making the trip so enjoyable.

Photo credits to I don’t really know who, but you know who you are. 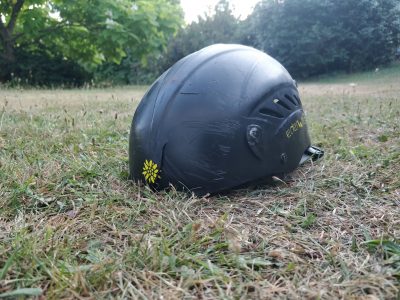 The Fallen Angle: lessons from a climb gone wrong 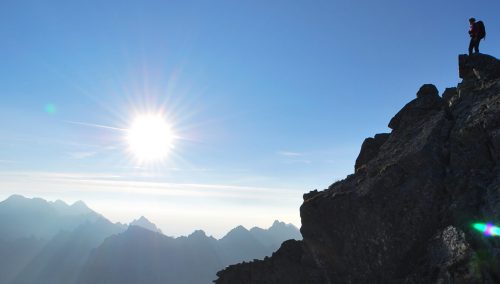 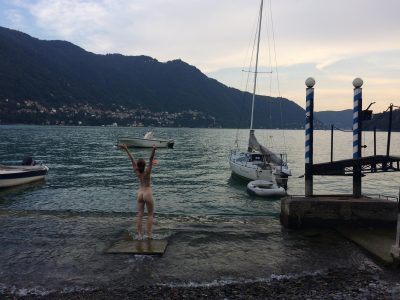 How to do a lake bag- A Beginner’s Guide