Norway: An Unforgettable Trip to the Lofoten Islands

The expedition began the same was as many other UBES summer trips; at about 4am in Gatwick Airport. Our first flight to Oslo would be far more of an event than anyone intended with three of our bags going missing (having never left Gatwick). However, not wanting to let this get us down all thirteen of us set off into Oslo for a quick look around with high hopes. 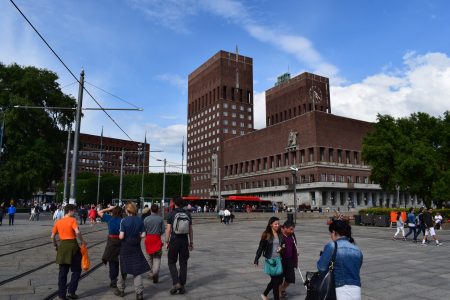 After spending a day looking around Oslo we headed back to the airport for a restless night of sleeping on waiting room chairs. Luck had not been on our side and the missing bags had not arrived, but we had to move on and all of us boarded our various flights and trains from Oslo to Bodø. It was from here that we intended to get a boat out to the islands. However, due to our lack of bags three of us had to remain in Bodø and stay in a hostel until they arrived. Many sad farewells were said and we left the others to go on to the islands. 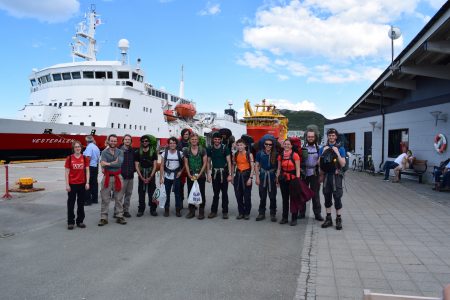 Ready to board the ferry to the islands, Adam Dawson

While the bag-less waited it out in Bodø the rest of us finally arrived on the islands and after a short bus journey reached the campsite at Storfjordvatnet. We enjoyed a quick paddle on the lake in the campsite’s canoe and rowing boat and then headed to sleep for our first night in the arctic midnight sun. The next day another bus journey took us to the eastern side of the island of Vestvågøya to start the trek. We set off in the rain and cloud to cross the island, heading over the ridges and rolling hills until we reached our first wild camping spot of the trip. The next day we continued on to the town of Leknes on what ended up being the longest day of the trip. Bright sunshine and clear skies throughout the day gave us amazing views across the fjords and steep-sided peaks the Lofoten Islands are famous for. The day finished with a short bus ride to take us to the next island of Flakstadøya and a camping spot overlooking the large fjord of Nappsstraumen. 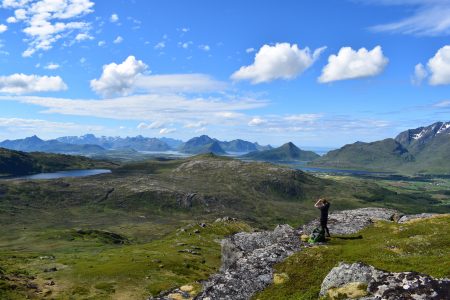 Overlooking the islands and fjords on Vestvågøya, Adam Dawson

For day 3 we followed the picturesque coastline of the island to the World Heritage Site and preserved fishing village of Nusfjord. Along the way we stopped at the mini-fjord of Sørdalsvatnet where we found an abundance of mussels just waiting to be picked in the crystal clear water. After our impromptu lunch of freshly cooked mussels we continued on, passing glistening lakes and the dramatic slab walls forming the valley in the centre of the island. From Nusfjord we again followed the coast on the centuries old ‘Fisherman’s Path’ to the small town of Nesland followed by a long slog up the road to Ramberg along the impressive fjord of Skjelfjorden. 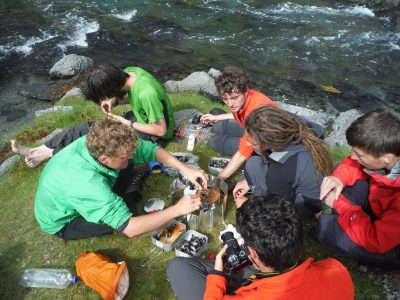 Meanwhile, back in Bodø, after three frustrating days where the three of us left behind explored the local area and mercilessly pursued our bags, they finally arrived and with that we were on a boat out to the Lofoten Islands to join forces with the others. ‘twas a misty day we set out on, and as we closed in on our destination- Moskenes, we began to see the islands dramatically emerging out of the fog, looking very much like the islands of Jurassic Park. We quickly boarded a bus from the ferry terminal and in no time at all we were reunited with the others in Ramberg! After quickly celebrating my birthday with half of a cake it didn’t take long before we found a local bouldering spot on the beach and saw in midnight with the sun gleaming off the sea in front of us (the sun having never set for our entire trip). 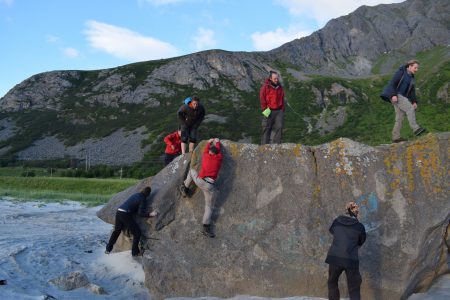 Bouldering on the beach at Ramberg, Adam Dawson

After our emotional reunion with the others it was quickly like we had never been apart besides the fact that they were all significantly more tired and smellier than we were. The next day functioned as a rest day for them in which we did a small peak nearby known as Moltinden (696 m). All hopes of getting a view from this peak were destroyed by low hanging cloud however. That evening we left the campsite in order to find a cheaper wild camping spot somewhere close by. An appropriate (and very comfortable) location was found and an evening under the sun was spent listening to music and relaxing. 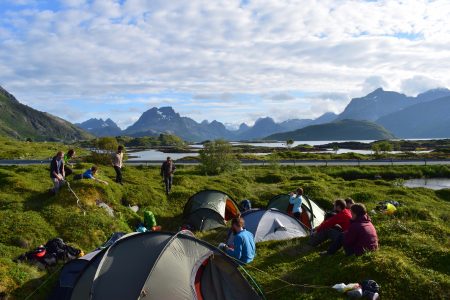 The next day promised to have the worst weather of the trip so far. We walked over the very picturesque series of bridges leading away from Ramberg and over a series of low cols towards our destination- Kvalvika. Upon arriving and taking a small break it became quickly apparent that the weather was not good enough to spend a night here as had originally been intended. 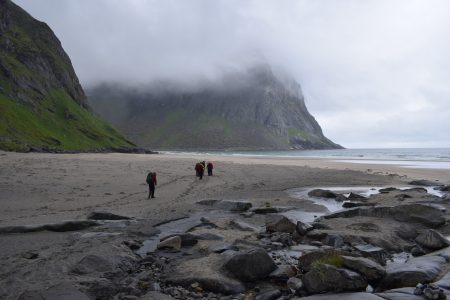 We continued on from the beach and over another col further back inland. This was one of our longest and most unpleasant days and even the campsite we finally found was lumpy and uncomfortable. That evening was spent cowering in tents and avoiding the rain instead of outside as a group.

The day after brought significantly more hope however with the rain having moved on, a hard and boggy start led us to some high ground and after crossing over some higher cols we came to the most striking part of the islands- the valley and beach of Horseidvika. With the sun having come out it was quickly decided that this is where we would camp for the night and after having set up tents everyone went to the beach to swim in the arctic sea. The rest of the day was spent lying in the sun and we were even able to find enough dry wood to have a fire in the evening! One side of the valley was made up of a slabby wall and a few of us went of to explore this, quickly finding out that it was not a small feature, it was in fact a giant feature that was very far away. This was definitely the nicest and most memorable day of the trip. 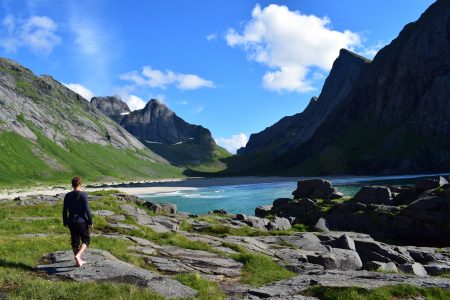 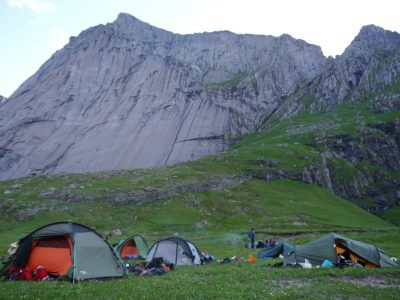 Our campsite and the giant slab behind, Alex Waldron

Early the next morning we set off for Kjerkfjorden where we would get a boat to Reine, the most well-known part of the islands. Here we would set about climbing Reinebringen to see the prettiest and most famous views of Lofoten. These were truly unforgettable and are probably the photos one would be most often shown if they asked anyone about the trip. A quick trip to the supermarket in Reine was followed with a small bus journey down to Søråvgen and the final two days of our journey. We found a lovely campsite overlooking the town and now the weather was nice again we were all able to sit out together for the evening. 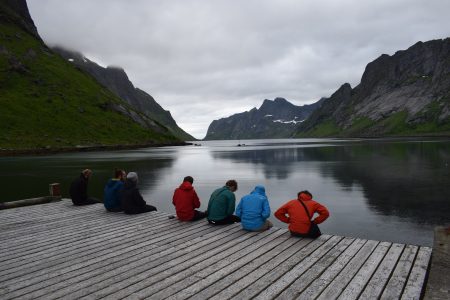 Waiting for the ferry at Kjerkfjorden, Adam Dawson 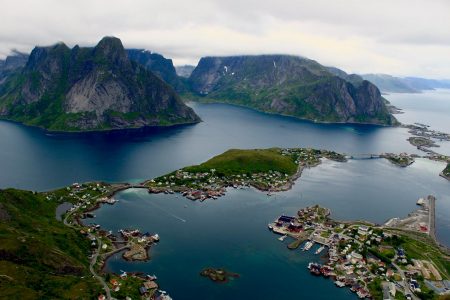 On the penultimate day of the trip we left camp and continued up the valley towards our aim for the day- Munken (769 m) however nearing the top we discovered that actually reaching it required a climb, and with the visibility closing in we decided that we should head back down to make camp for the evening and prepare for our objective the next day. We set up our tents on the steep slopes next to Tennesvetnet (239 m). 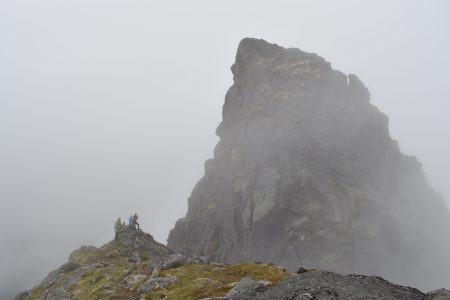 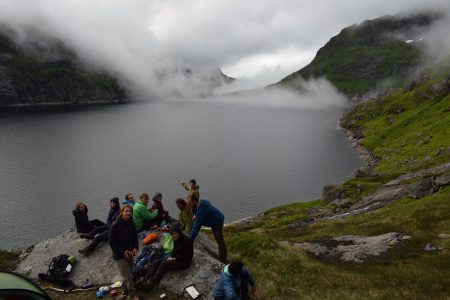 On the final day of our trip we headed for the largest peak we would reach- Hermanndalstinden (1029 m). The walk to the peak was lovely, if steep and difficult at times. The last few hundred metres being a rocky trudge, finishing with an easy scramble. The views from the top were, however, disappointing as the fog had come in reducing the visibility to mere metres. After bagging the peak we made our way back down to our camp, packed up our tents and retreated further back to where we had camped two days before. The weather was lovely and it was a perfect end to an amazing trip. 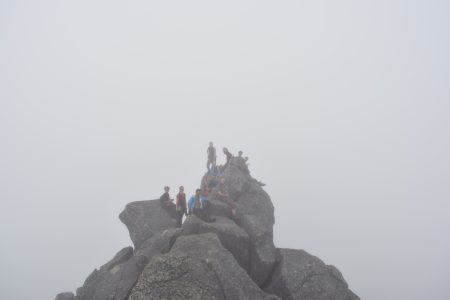 The final day was a simple one; we headed to the town at the end of the road, known simply as Å, to say that we had truly finished our trek across the islands. Here we found some tourist shops so were able to buy some gifts, then we walked back along the road to Moskenes and the ferry back to Bodø. After arriving, we found a campsite and were able to relax for a final evening before we had to all take our various flights home. 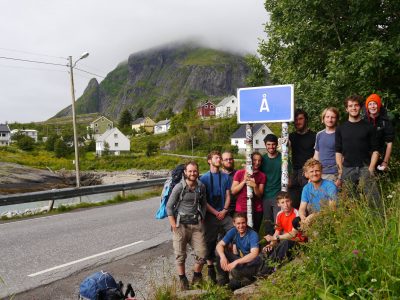 The town of Å, Alex Waldron 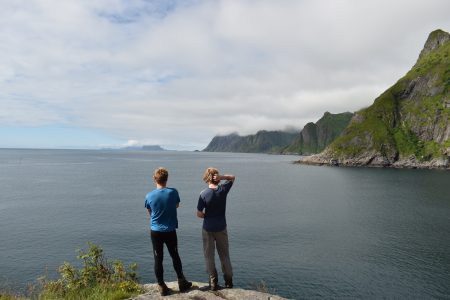 Looking out over the end of the islands, Adam Dawson 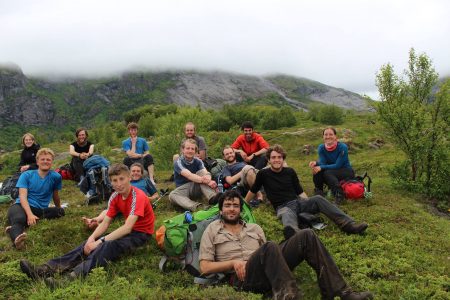 Group photo at the end of the trek, Declan Lagan

This was a truly amazing trip, where we all saw some awesome scenery and had an awesome time, thank you to everyone for making it so much fun and particularly to Adam for organising such an unforgettable trip!

By Ashley King and Adam Dawson

Also make sure you check out the amazing video Declan made of the trip: