Finding ourselves in the Brecon Beacons

As we drove across the Severn Bridge and deeper into the countryside, towards our destination, it became increasingly clear that it was going to be a lovely day to be out on the hills (in Wales- surely not?). Upon arriving, we were promptly given maps, and compasses, and then embarked on an exercise to determine how many paces we’d take to walk 100 metres. It was clear that we were in for a full on day of navigation-y joy!

We were then divided up into small groups based on our previous experience with navigation, to ensure that we could all get the most out of our day. This ranged from people who wanted to learn the basics of navigation, to those who wanted to brush up on some slightly more complicated techniques

After a quick review of the map, my group headed out of the village and up towards the hills. Ben chatted with us about our previous experience with navigation and group leadership, while we tried to work out where he wanted us to go. After successfully making our way across a river without falling in (which as anyone unfortunate enough to go on previous trips with me will know, is something I seriously struggle with), we headed on up. Once we were closer to the top we practiced using contours, bearings, and pacings to find small features such as shake holes. 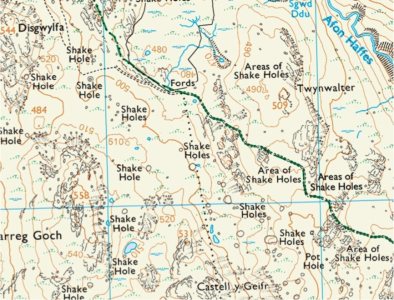 On one such journey we were interrupted by a shout from Ben:

“There’s something very dead in that hole!” Curious, we all headed over. Crowding around the shake hole, we were surprised to see not a bird or small mammal, but instead, a donkey at the bottom. After confirmation from our small group’s token vet that it was indeed a) a donkey, and b) probably dead, we were all tried to work out what could possibly have happened to it, before moving on for some more super fun micro navigation! 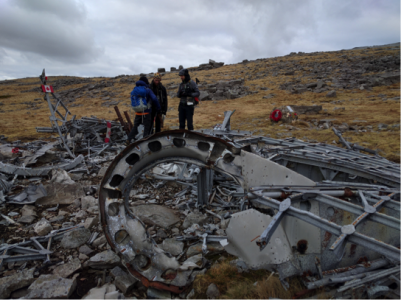 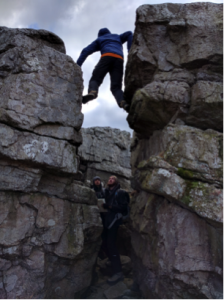 After some more of this, we decided that sitting on some rocks by the lake would be the perfect sheltered location for a spot of lunch. As well as making me feel like an excited 5 year old on a school trip, bringing packed lunches allows the opportunity to see what food your fellow UBESters will choose when the classic cheese and pickle sandwich is not provided. Raw green beans are allegedly a delicious snack, but I remain unconvinced.

After some sustenance it was time for an afternoon of more exciting micro nav! Yay! I saw more shake holes that day than I had ever seen before in my life, and probably will ever see again.

After a couple more hours wandering the hills, we retraced our steps back down just as dusk was beginning to settle, once again navigating our way across the treacherous waters of the River Tawe. Unfortunately this time my luck didn’t hold and I was caught out by an unexpectedly slippery rock…

Once back down in the village we headed to the Gwyn Arms to regroup; aka the world’s least friendly pub. This pub was so bad that it actually forced me to join tripadvisor just so that I could write an extremely passive aggressive review of it. I would also like to take this opportunity to formally recommend that UBES never returns to this awful place as it is full of suffering and despair.

At this point, we drove to the bunkhouse for a delicious dinner of bolognaise cooked by Rob and Adam. This was a great chance to warm up with a nice mug of tea, look at maps from all around the world, and plan our next adventures. We were then split into small groups to practice planning routes for different groups and scenarios, which was a very useful exercise, although there was only so much that could be done for the astronomers who wanted to go ‘summer hillwalking’ in December…

Feeling suitably inspired, we then headed back outside in the dark for a smidgen of night navigation. Our breath billowed in plumes in the night air and the ground sparkled under the illumination of our headtorches as the temperatures dropped and frost began to form. After an hour or so of micro navigation in the inky darkness, a very different ball game than in the day, our group was very pleased and surprised with our success – it turns out that all those navigations techniques we had been taught were actually working – who would have guessed? We then headed back down to the minibus and settled down to wait for the last group (who’d decided it wasn’t a proper UBES trip if you didn’t get to a summit at some point in the day), taking the opportunity provided by the cloudless sky to have a good old stargaze – a lovely end to a fantastic day.

Big thanks to Duncan, Adam, Rob and Ben for looking after and teaching us all, and to Rebs for organising it!