The clouds were closing in, it was starting to get dark, and I was lost and alone at 2400m fearing imminent attack from a territorial chamois. Combine this with missing the last lift down by a good two hours, enormous hunger and an inconveniently timed existential crisis. Apparently it takes 19 days of solid hiking and working full time until you crack. (Of course, according to social media and my mum, I’d actually had a jolly time bimbling up a mountain to look at friendly mountain goats): 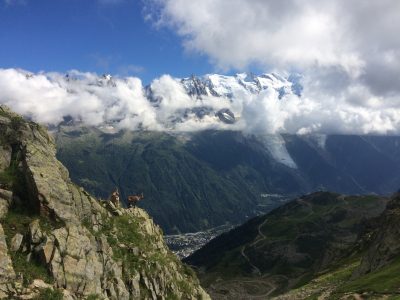 Lots of you will know what I’m on about since I plagued Facebook with enviable photos for a whole year, but for everyone else: I lived in Chamonix for my third year of university. And it was fab. During August of this year, I embarked upon 30 hikes in 30 days. The motivation behind this was to try to raise money for a relative of mine, Charley, who last year was diagnosed with a rare form of terminal cancer. All around the world, her family and friends were trying to raise £100,000 to fund a treatment called immunotherapy which is not currently funded by the NHS. Since Charley has always had a love for the mountains, I thought: ‘what better way to raise awareness about her situation and immunotherapy itself than to drag myself up a mountain every day for 30 days?’…And shockingly it worked. (Although I did have trouble explaining to many French people the concept of sponsorship). The added challenge was my full time job as a receptionist in a hotel. I worked 7am-3pm or 3pm-11pm 5 days every week, which meant I had to bid farewell to late nights drinking wine and begin overdosing on carbohydrates. 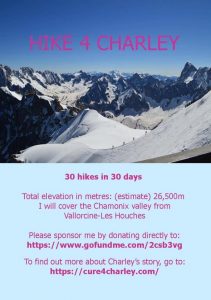 And for all the pictures:

But for this blog post, I’ve narrowed it down to my 5 favourite hikes in the Chamonix valley.

5) Bec de Lachat (Day 4)
The first 5 days were the hardest. I was relatively fit after a season skiing, but getting up before work or running for the bus after my shift finished was not easy to get used to. Nevertheless, by day 4 I’d managed to recruit some friends to get up much earlier than normal to walk off their hangovers and catch the train from Chamonix to Le Planet. 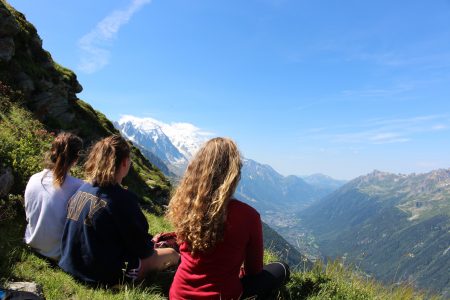 Views for days of the valley towards Les Houches

The hike up to Bec de Lachat is one of the most beautiful hikes I did. It takes you through a forest trail before intercepting a very steep and scrambly path that ends between the Glacier d’Argentière and Glacier du Tour. On such a clear day, we had views from the 2460m summit marked with a wooden cross over the entire valley. 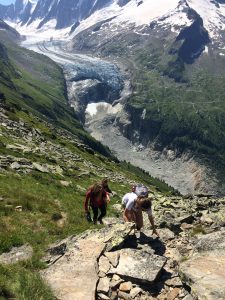 Almost at the summit overlooking the Argentière glacier

It was the perfect (if a little windy) lunch spot. From there, we took a path down towards Le Tour to make the hike circular, and then back through the woods to finish in Mont Roc. 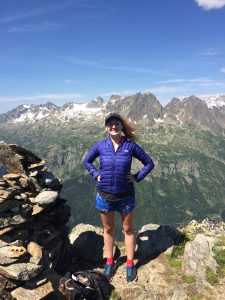 4) Col de Bérard (Day 12)
We started from Le Buet in the Vallorcine valley and enjoyed a tranquil walk on a well-marked path through the woods and next to the river L’Eau de Bérard up to the Refuge de la Pierre à Bérard . 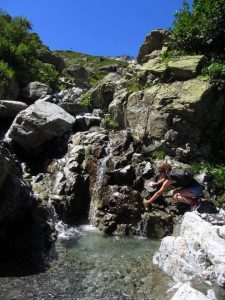 From there, what should have just been a bit of a scramble up an indistinct path ended up with me using every body part to not slip all the way down the snowy Col de Bérard. 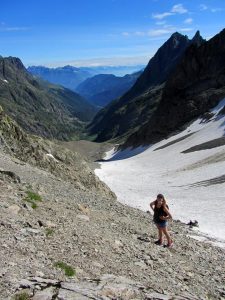 Trying to avoid the snow in the Col de Bérard (cred. J. Diot)

I regretted wearing shorts and not bringing poles after I scraped all the skin off the back of my thighs. However, it was an incredibly picturesque walk, and we glimpsed some disgruntled Ibex – which made up for the fact that it was definitely one of the most challenging. 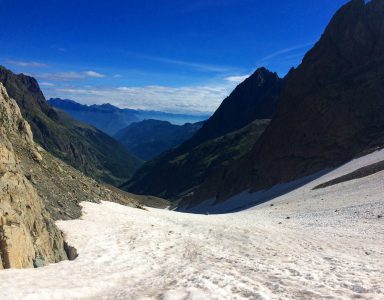 Views into Switzerland from the Col (no saturation enhancement here whatsoever)

Possibly my favourite lake, ever. The hike to Lac Cornu is also probably the easiest and one of the most popular walks in the Aiguilles Rouges. This is a great one to do if you just have an afternoon free, because you can be incredibly lazy and take the cable car from Chamonix up to Plan Praz, which is already at 1999m. From there, we simply traversed a clear path to the Col Cornu (looking down upon the télésiege du Cornu, which is bizarre to see without snow) and then descended to the beautifully calm and isolated lake surrounded by rocks worn by ancient glaciers. 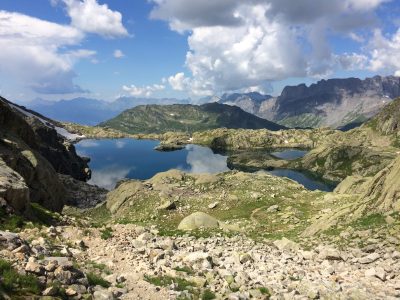 Lac Cornu and the Désert de Platé on the top right 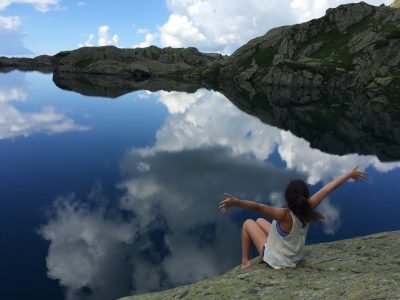 Of course, being a committed UBESter, the arrival at a lake meant one thing above all: a lake bag. So, to the surprise (or disgust?)  of my companions, I undressed down to my birthday suit and jumped into this lake at 2276m of altitude. Needless to say, it was absolutely freezing, but also one of my happiest days. The family with young children that turned the corner as I tried to clamber out of the lake did not have such a joyous experience. 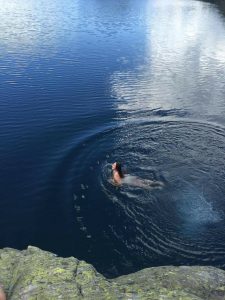 Getting my kit off for the lads

From Les Granges, which is a hamlet just above Les Houches, this hike took us up a ravine on a slightly worn away path (which led to a questionable crossing of the Torrent de la Griaz). Nevertheless, the paths are generally clear, and a winding forest route soon opened up to reach the abandoned forest building of Les Arandellys where we stopped for some homemade cake. Soon after, we hiked up the Col du Mont Lachat and reached the summit of Mont Lachat (2215m), with the sweeping flowery meadows that are so distinctive to this part of the valley. From here, it’s possible to see the Bionassey Glacier and the Tramway du Mont Blanc, as well as giving a new perspective of Mont Blanc. We then headed towards the Téléphérique de Belle Vue, and followed a path all the way down to the bottom (and made it back in time for work). 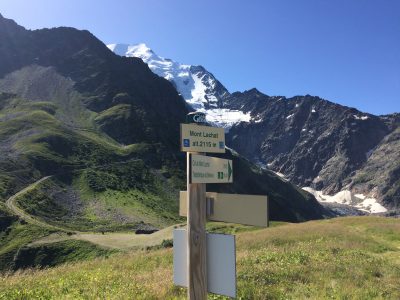 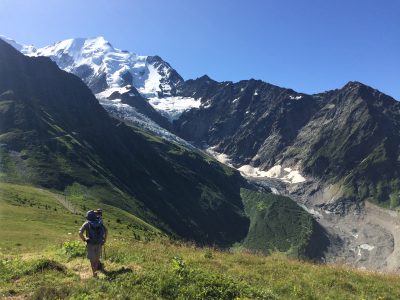 The Bionassey Glacier peeking out

Described in one guidebook as a ‘real humdinger of a hike,’ the hike to the summit of Mont Buet did not disappoint. We were blessed with beautiful weather and yet more incredible views. 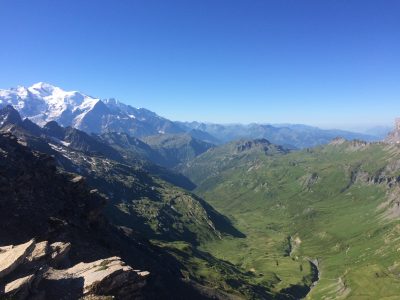 Views of the Mont Blanc massif

Mont Buet or the so-called ‘Mont Blanc chez les Dames/Lady Mont Blanc’ (because Mont Blanc itself is obviously not feasible for us ladies) is the highest mountain in the Aiguilles Rouges range at 3096m. It has the same start as the Col de Bérard, but after the refuge, take a right and begin the ascent under the Col de Salenton. There was still a lot of snow present, even in August, which led to our wary traversing of the slopes. 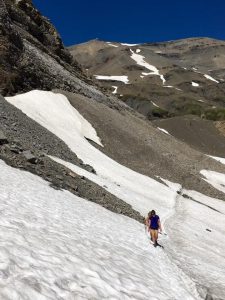 Treading carefully on the descent

The steepest part is immediately before the summit; a dusty climb which you do not want to be doing in the middle of the day as it is so exposed to the sun! Once at the summit after climbing for 1760m, we were rewarded with a breath-taking 360 degree view of Mont Blanc and its neighbouring peaks, into Switzerland, across to Samoens, and of the Désert de Platé. We descended by the same route back to Le Buet and treated ourselves with an ice cream at the beautiful waterfall: la Cascade de Bérard. 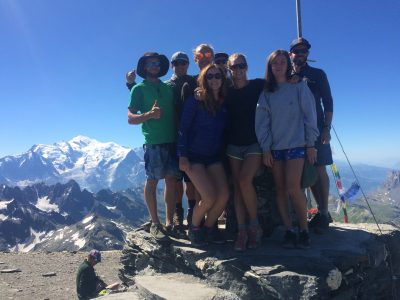 These are only a handful of the hikes I did, but this month was honestly one of the most rewarding experiences of my year abroad in Chamonix. I now know the valley like the back of my hand, and more importantly, I helped Charley to reach her target of £100,000 which she will now be able to spend it on the immunotherapy treatment. If any of you go out to the Chamonix valley, please get in touch and I will happily give you some more hike recommendations, and tips on how to achieve the best sock tan line. 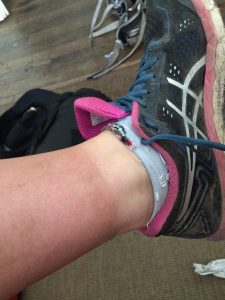 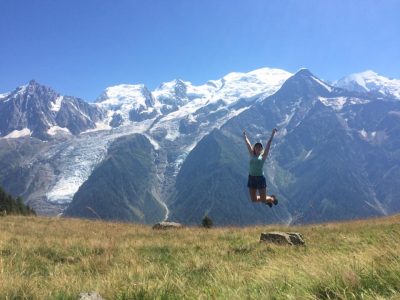 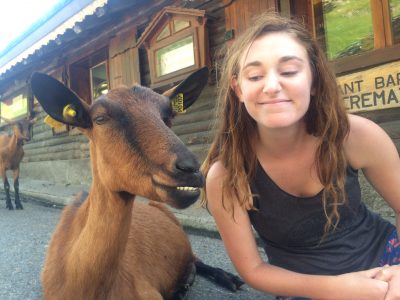