19th November 2015 UBES
Off
Adventures, Climbing, Scotland, Trips, Walking
Share This
If you want good weather, don’t go to Scotland. This is what my tent looked like on the last day of May… 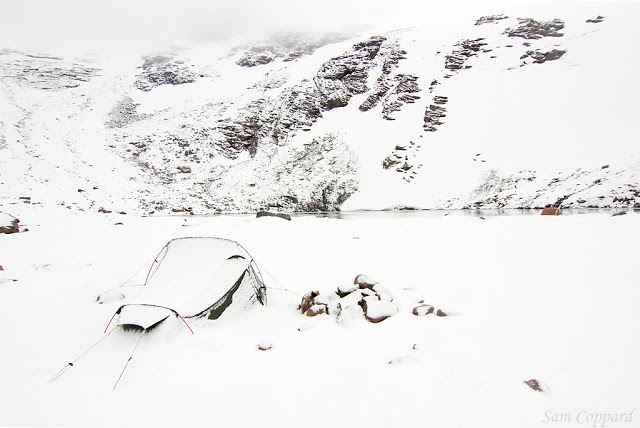 Back in spring I spent five weeks wandering around Scotland with a tent, a load of camera gear and hardly any money. I wasn’t intending to do anything too hardcore as I was mostly interested in wildlife photography, but the weather seemed determined to make things difficult… 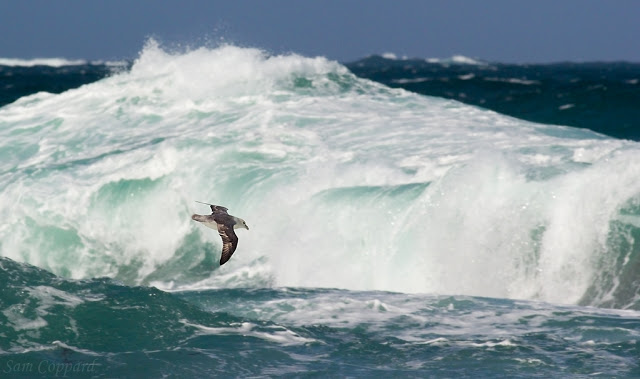 The trip started brilliantly – my first night on the Outer Hebrides was spectacular. Perched on a tiny patch of grass atop a rocky tidal islet on a white sand beach, it was probably the best wild camp spot I’ve ever found. But the next day a storm swept in from the Atlantic, and the squalls didn’t let up for the next two weeks. 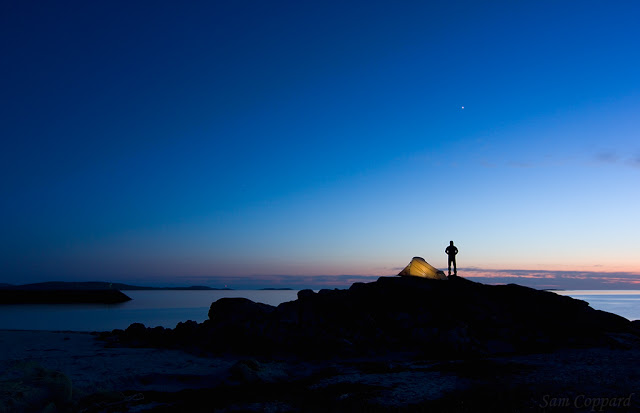 I spent six nights in a row with my tent buffeted by winds howling at Storm Force 8, forced to sleep in the foetal position because the tent walls were permanently stretched inwards. 2am tent repairs when the wind proved too much weren’t a lot of fun either. 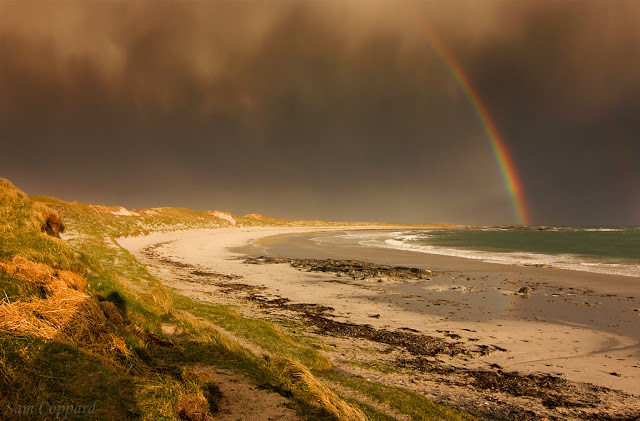 There was one sunny day in the middle of it all where I unbelievably managed to get sunburned (although I am ginger…) but with the wind chill still at -3C, my resulting tan dive have an attractive hat line.
On the single other pleasant day I walked a few miles across the sand to an uninhabited tidal island. It was beautiful, with the thin layer of water reflecting the sky above, and the promise of an entire island to myself. 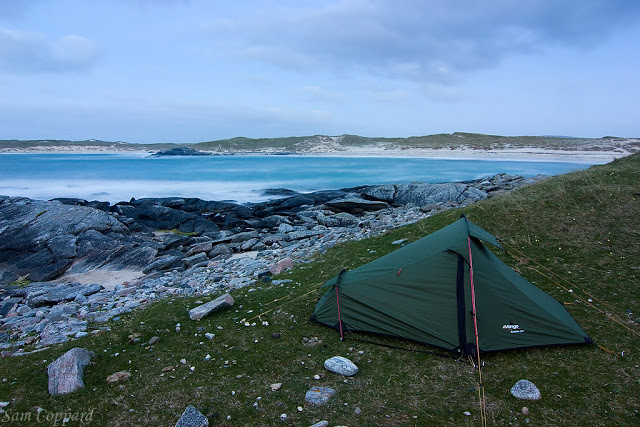 But the next morning, the wind was howling again and the rain was torrential. I had to wait a few hours for the tide to go out far enough to make the crossing back, and then I set off towards the mainland – straight into the wind. A combination of horizontal wind-blown rain, sand and sea spray scoured the exposed parts of my face, which were left raw and peeling for days afterwards.
Eventually I’d had enough, so I caught a ferry back to the mainland and hitchhiked across to the Cairngorms. I was photographing Ptarmigan (which are awesome by the way) when an unexpected blizzard swept over the mountains, smothering me, my tent and everything else in a blanket of snow. The accompanying thunder and lightning were disturbingly close by. 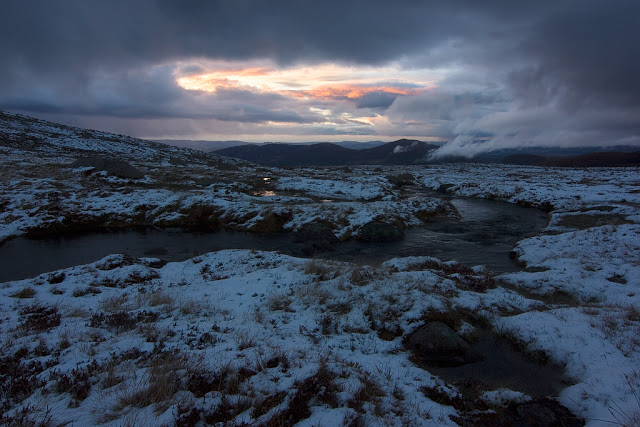 The next morning I was startled by my whole tent suddenly shifting sideways, before a very large nose came through the outer – reindeer! After scaring it off before it knocked down my tent, I stepped outside to the surreal sight of a whole herd of furry awesomeness surrounding me in the snow.

Back down at sea level, I finally had some good weather! A lonely tent by a still loch, backed by ancient Caledonian pine forest, is pretty hard to beat. 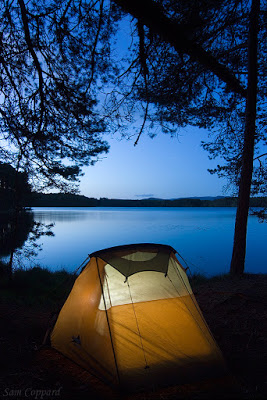 The forests themselves used to cover vast swathes of the Highlands, and it’s a shame that’s no longer the case, as they really are beautiful. 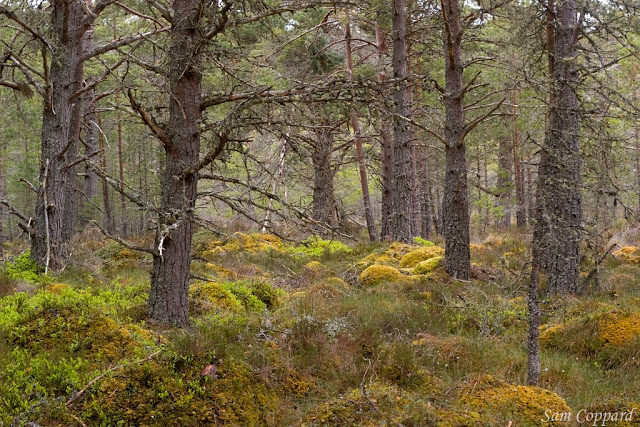 With the improved weather I could even appreciate how short the nights are this far north in early summer. In fact, it never really gets dark at all. This shot of my tent was taken at midnight under an overcast sky. You can read a book in the middle of the night if it’s clear. 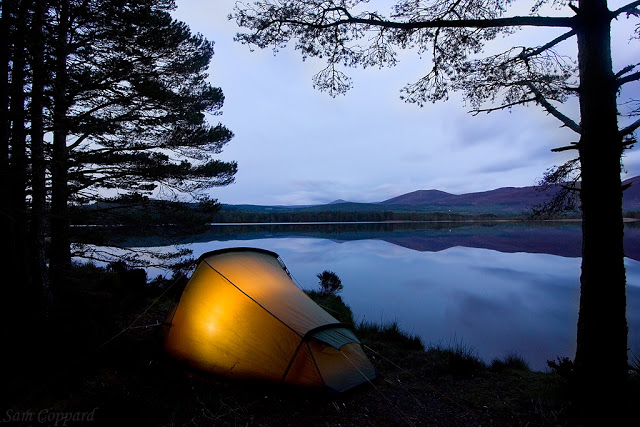 The Shetlands were my final stop. With the promise of good weather, I was pretty excited. The first couple of days had a lot more rain than was forecast and a mouse chewed through my tent inner, but it wasn’t too bad. When I reached the northernmost tip of the UK at the Gannet colony of Hermaness, looking out to the remote lighthouse of Muckle Flugga, it was perfect. Warm, no wind, even a bit of sun! 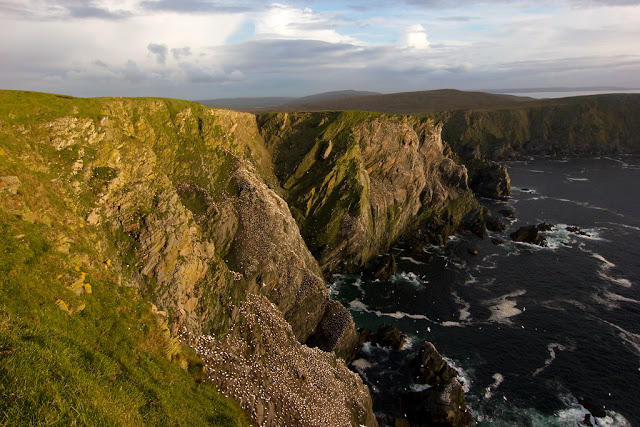 I was there mostly to photograph Puffins, and they put on a pretty good show before I set up my tent a little way back from the edge of the cliff an hour or so after sunset. By 2am, the conditions had worsened. The forecast had promised a wind-free night, but my tent was getting pummeled. It was so loud I kept waking up thinking there was thunder. 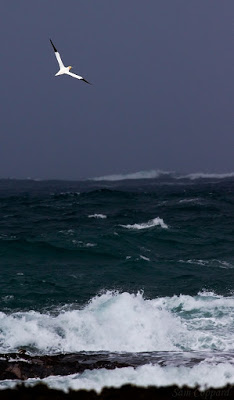 At 5am, it had got so bad that I realized I needed to take the tent down before the wind did it for me. I should probably point out that the wind was coming off the sea, or I’d have got the hell out of there a lot sooner.
As it was, I was too late anyway. I had just started shoving everything into my backpack when the main pole snapped. This meant I had to support the tent with my head to get the rest of my gear packed up, so I spent the next ten minutes getting repeatedly smacked in the face by a broken pole.
Emerging into the dawn, the wind was so strong I could barely stand up. A couple of waterfalls further along the coast were flowing over the cliffs, but no longer reaching the sea as they were blown straight back over the moorland. A gully funneled the wind so powerfully that it lifted me (and a 25kg backpack) off my feet and deposited me a little further back from the cliffs. Even though it had been an eventful trip with lots of setbacks, I’d still had a fantastic time. But with very little money left and now no tent, it was definitely time to go home.
Shameless self promotion – if you want to see more adventure and wildlife photography, please check out my website at samcoppard.com. Thanks guys! 🙂 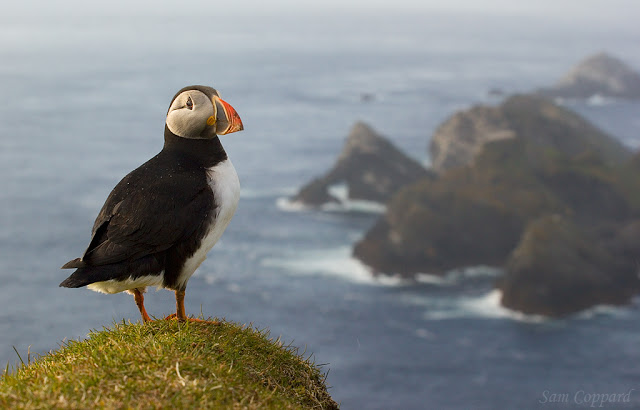